Yesterday, former Tory MP and one-time Cabinet Minister David “Shagger” Mellor inexplicably fetched up on the BBC’s Sunday Politics to be lightly grilled by Andrew “Brillo Pad” Neil on the North Wales child abuse saga. The deeply unsavoury Mellor, in the course of answering the Brillo inquisition, blatantly smeared someone who had been abused by more than fifty men as a “weirdo”. 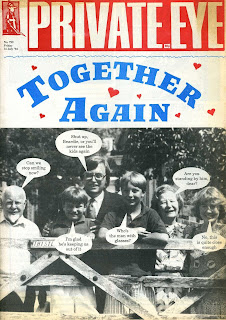 That was bang out of order. And, if we’re going to allow Mellor, who was rightly rejected by the electors of Putney in 1997, to sit in judgment on others, maybe we should allow his own record to pass before our inspection. Mellor was the MP who coined the expression “The press is drinking in the last chance saloon”, and exactly why he might be wary of their freedom soon became apparent.

His extra-marital liaison with actress Antonia de Sancha had been noted and then recorded via a bug in her flat – this was not at the time illegal – by her landlord. Mellor had had sex with Ms de Sancha clad only in his Chelsea shirt. She had sucked his toes. He had been so exhausted by one particular encounter that he could be heard telling her “I am absolutely knackered”.

Hence the cover of Private Eye issue 799, with a staged family snap duly captioned. Note especially the word balloons at the right – “Are you standing by him, dear?” “No, this is quite close enough”. Mellor and his wife, at right in that photo, were divorced in 1995. He was, in the meantime, the subject of a legendary Sun headline after leaving the Cabinet: “From Toe Job To No Job”. 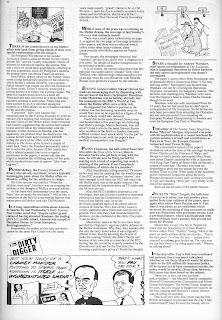 The exposing of this pillar of moral probity led those who scrabble around the dunghill that is Grubstreet into a suitably righteous froth, only for the Eye to call several of them out for hypocrisy, not least Peregrine Worsthorne, Ivan Fallon, Standard editor Stewart Steven, Paul Callan, and former Fleet Street lothario Peter McKay, aka Peter McLie, and still the World’s Worst Columnist. 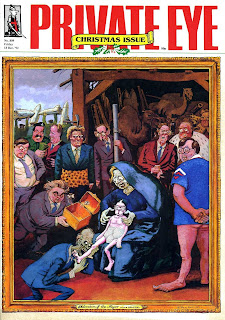 Observers of the Murdoch empire might also find the cartoon at the foot of Page 6 in Eye 799 interesting. The late John Kent captures Rupe and Kel – and their attitude to the facts – rather well. Meanwhile, Mellor’s memorable indiscretion was still fresh enough in the public memory for him to be included in the 1992 Christmas Issue cover by Steve Bell – wearing only a Chelsea shirt, naturally.

And then Mellor managed to turn a Tory majority of 7,500 into a Labour one of almost 3,000. Yet this loathsome individual is still allowed into the studio to pontificate on the subject of a child abuse scandal. No wonder that former MP Louise Mensch called his “weirdo” remark “abominable and repellent”. That just about sums up David Mellor. Maybe he has shot from the hip one last time.

Although, of course, he’s also good for a laugh.
Posted by Tim Fenton at 17:57