The Maily Telegraph’s political editor Benedict Brogan used to toil in the service of the legendarily foul mouthed Paul Dacre. Anyone who had not already picked up on that detail will have been left in no doubt this morning, after his intervention on the lead up to the Leveson Report: “It has taken the Left years, but finally the press is at its mercy” he thunders, in an almost Pavlovian response to the Dacre bell ringing. 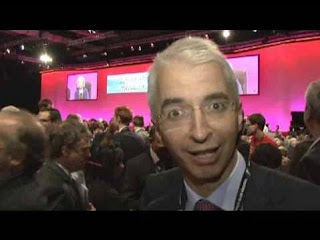 Leaving aside the inconvenient fact that this view is more or less the same one advanced previously in the Mail during its hatchet job on David Bell, and copied assiduously by Rupe’s downmarket troops at the Super Soaraway Currant Bun, this is yet another attempt to frighten the readers into then believing any old drivel they are fed on giving the Fourth Estate one last chance.

Yes, the status quo must continue because ... Lefties! That’s Brogan’s argument in a nutshell, and the rest of his screed is no more enlightening, although at one point there is unintended hilarity as he tells that Labour MPs Tom Watson and Chris Bryant “have led the charge against ... Murdoch ... with ... consistently ruthless efficiency”. I didn’t expect the Spanish Inquisition.

Brogan then signs off, after deploying every left-bashing and smearing technique known in Dacreland, with “My hunch ... is that Mr Cameron will say [the left has overreached itself] on Thursday”. So it’s only fair that we look at how good the Brogan “hunch” has been in the past, and we need go back no further than January 18 last year to see this remarkable device in action.

On that day, Brogan penned “Andy Coulson’s staying power in Downing Street”, telling “Andy Coulson commands an extraordinary hold on David Cameron and the government machine ... the PM shows no sign of being troubled by the difficulties News Corp is having”. Three days later, Coulson walked, and the decision had been made two days previously. That’s the day after Brogan’s article.

The same day that Brogan went into Ron Hopeful mode, I observed “The man from the Maily Telegraph may be nominating himself for a ‘famous last words’ award”. This put him in the same circle of cluelessness as Iain Dale (“Coulson’s accusers can go to hell”) and the perpetually thirsty Paul Staines (“Punters now give Coulson a 96% chance of surviving”).

As I later noted, this inability to read the most obvious of runes was shared with Tim Montgomerie of ConHome, Matthew d’Ancona, and London’s occasional Mayor Alexander Boris de Pfeffel Johnson. All are in the same camp on Leveson. I will leave it to others to make the connection and conclude just who is calling this one right, and who is going to end up with yet more egg on face.

Wilful denial might look foolish, but it certainly seems to pay the bills.
Posted by Tim Fenton at 10:51