The Mail On Sunday’s front page headline today, “PARIS JIHADIS ‘GOT IN AS FAKE REFUGEES’”, tells you two things: that the paper is pushing the line that at least some of those involved in the Paris attacks had travelled from Syria as refugees, and that they do not actually have sufficient evidence to back that claim up - hence the very obvious use of “distancing” quote marks. The body of the MoS story is no better. 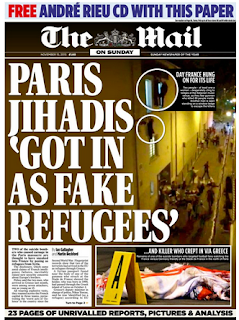 Readers are told “This is the face of one of the Paris killers who allegedly sneaked into France by posing as a refugee as it emerged a woman may have been part of the eight-strong ISIS kamikaze terror squad … Serbian media claims Ahmed Almuhamed, 25, who was carrying a Syrian passport, allegedly blew himself up at the Bataclan concert hall, where at least 89 people were slaughtered on Friday”.

There was more. “It is believed two of the bombers were carrying Syrian passports and another may have had an Egyptian passport. At least two are believed to be French while several could also be Belgian … The disclosure that some may have entered Europe as migrants, which came amid claims of French intelligence failures, inevitably raised new security concerns about Europe's borders”. 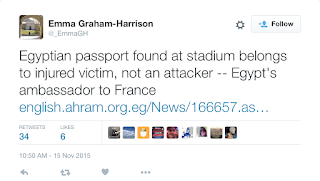 That’s most convenient for the MoS: the narrative peddled by the paper and its daily stablemate has consistently suggested that there are too many young men among all those migrants, and as they are mostly Scary Muslims (tm), that means some of them must have something to do with ISIS, or whatever they’re called this week. The MoS wanted to believe this was true, and so it has allegedly come to pass.

However, and here we encounter a significantly sized however, this reading requires a highly selective use of available information. What MoS readers are not being told is that fake Syrian passports are in widespread circulation, and that concerns over the authenticity of the one cited have already been raised. 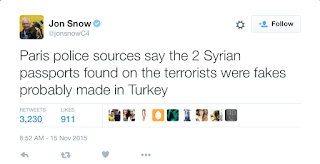 We now hear “a US intelligence official told CBS news the Syrian passport might be fake. The official said the passport did not contain the correct numbers for a legitimate Syrian pasport and the picture did not match the name”. Jon Snow of Channel 4 News has told “Paris police sources say the 2 Syrian passports found on the terrorists were fakes probably made in Turkey”. And the Egyptian passport is not what it seemed.

Egypt’s ambassador to France has told that the passport found at the Stade de France belonged to an injured victim, and not an attacker. Added to this is the thought that ISIS want the impression to be given that refugees may be behind the attacks, as a way of taking the heat off the real culprits, and making it more difficult for refugees to flee their territory. They would rather keep them and control them.

With new powers for the spooks being debated right now, it is most convenient that the security services get this propaganda. But that does not make it factually correct. ISIS are trying to take western media for mugs. And some western media is all too happy to be taken. Like the Mail On Sunday.
Posted by Tim Fenton at 12:06

As the Middle East situation begins to deteriorate even further there are no depths British and US warmongering “leaders” and their mainstream media will not plumb. There is no end to their murderous calumnies, lunatic propaganda and opportunism. At the present rate it can build to only one logical genocidal conclusion. Which is probably what is wanted by the perpetrators, the same type of fanatical conscience-free madmen who made the last century the most blood stained in human history. The present gang are merely part of the poisoned Malthusian/Milner legacy. There is irony in Vienna as their meeting place of choice.

For it was there Nikita Khruschev met John Kennedy for their first summit conference in June 1961. Between them, they managed to create an even worse atmosphere than already existed in the Cold War. It led directly to an increase in the already-insane arms race, and thus to the Missile Crisis of October 1962. Only the action of a single Russian submarine officer prevented the final horror of a global nuclear conflict. On the US side, Kennedy was threatened by a military coup, while doubtless Khruschev had his own loonies to contend with. Within a year Kennedy was dead and Khruschev deposed. Matters have declined ever since. Predictably, the Cold War has been replaced by the War on Terror (in which Orwell’s Goldstein has a variety of identities). After that, Eastern Europe yet again.

The so-called “Arab Spring” was a sham. It was designed to completely disrupt the Middle East and eliminate any leader with any sense of independence – whether he was a murdering dictator or not was immaterial. An added bonus was the affect on oil supplies and profits therefrom. So far as the perpetrators are concerned innocent civilians are merely “collateral damage,” an inconvenient interference with “shock and awe,” which in turn is designed to demonstrate military power. It is the modern equivalent of former colonial empires sending battleships to murder and oppress nationalist opposition.

In these circumstances is it any wonder if victims or their descendants are driven to similar vile homicidal madness? If they think they have nothing further to lose, human life and civilisation are the first casualties. Killing themselves becomes not only a logical but desirable act. The lessons of history are endless and they are apparently never learned by the mass murder club convened in Vienna, still less by the insane perpetrators of the Paris horror.

The fact is the West couldn’t give a shit about the mayhem it has caused in the Middle East, of the hundreds of thousands of innocent lives lost, of the destruction of whole nations and societies. It and its media has only raised its head when refugees did the logical thing and tried to reach safety. For the West, the Middle East can rot......as long as the oil supply can be controlled.

Which is why the horror of Paris is likely to be repeated anywhere, any time. Meantime, the only questions in the minds of controlled Western media will be: Who is the next Goldstein? When is the next Two Minutes Hate?

Breitbart is reporting the passport with glee

Even if true, they didn't get into Europe with AK-47s and ammo, did they? They would have to have had local help to get them.

French citizen Ismael Omar Mostefai, who was "blacklisted" by police in 2010 due to extremism, has been named as one of the terrorists behind the Bataclan concert attack that killed 89 of the 129 people who died in the massacre.
Neither a Syrian nor a refugee but a French Citizen who was born in Paris. How inconvenient.....