Rupert And Jerry - A Love Story

Far be it for Zelo Street to pre-empt the next issue of Private Eye magazine, and the potential for another Sylvie Krin special, but one media event this weekend cannot be allowed to pass by without comment. Yes, love is in the air for thrice-married Rupert Murdoch, an allegedly sprightly 84, as he steps out with his new partner, Texan-born model Jerry Hall, 59, as they visit the Rugby World Cup final, so they can see his side lose. 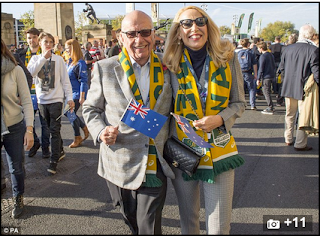 Why have the happy couple been splashed across the pages of so many papers? Could it be not unrelated to the thought that someone was taking the piss when they broke the news of the romance? I mean, what would a now-single high maintenance model like Ms Hall see in now-single octogenarian cash-rich multi-billionaire Rupert Murdoch? But serious it is, serious enough for the two to appear in public.

The Mail, at least, has been quick to play down the age difference: “The age gap of 25 years between Murdoch and Hall … is rather less than the 38 years between him and his third wife, Chinese-born businesswoman Wendi Deng”. Of course, and I’m sure Ms Deng’s interest was purely part of a mutual attraction, rather than any kind of gold-digging and career enhancing move. And don’t anyone mention Tony Blair! 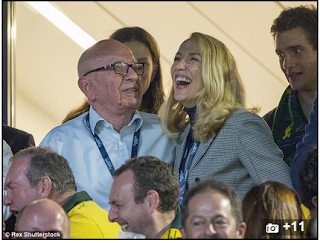 And yet … and yet. There are Rupe and Jerry at Twickenham, and the PDAs look, well, just that little bit … put it this way: as Murdoch moves a little closer to his date, look at the facial expression of the bloke at the top right of the photo. Then when, as the Mail carefully puts it, “Mr Murdoch moves in for a cheeky kiss, much to the amusing of his new girlfriend Jerry Hall”, look at his expression once more.

What’s the word I’m looking for here? “Cheeky”? Er, no. “Romantic”? Not really. “Passionate”? Come off it. “Intimate”? Maybe not. No, every word comes up with I at the beginning: implausible, incongruous, inconceivable and certainly not innocuous. The press is having to try very hard not to ridicule Don Rupioni - because, whatever his age, Murdoch is still very much a malign force in worldwide media. 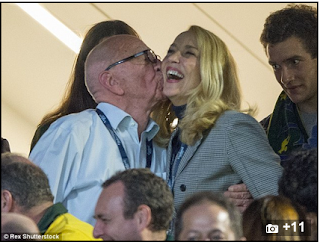 How much of that press is having to try very hard to be nice about Rupe’s new relationship? Well, the Guardian has run the story. So has the Mirror. So has the Independent. The HuffPo has also done a feature. ITV has covered the story, as has freesheet Metro. The news has even reached Australia, but … oh hang on a minute, the Sydney Morning Herald is run by Fairfax Media.

And there’s the rub: the one part of the media where there is no sign of this story is Murdoch’s own empire. Nothing in the Times or Sun. Nothing in the New York Post. Not a dickybird in the Wall Street Journal. And no word from Fox News Channel (fair and balanced my arse). Such is the, shall we say, sensitiveness and delicacy at seeing their boss with Mick Jagger’s ex that they are frightened shitless of commenting.

But what if Rupe and Jerry really is a love match? Shit, that was one enormous jet-propelled pink plastic pig that just flew over. I’ll leave that one there.

[UPDATE 1735 hours: Robin Henry of the Sunday Times has informed me that his paper did cover the Rupe and Jerry story this weekend.

Well, up to a point.

Under the heading "All Blacks win World Cup for third time", there is the photo of the couple arriving at Twickenham. And the caption, "Rupert Murdoch, the executive chairman of News Corp, ultimate owner of The Sunday Times, arrives with his girlfriend Jerry Hall to support Australia", pitches the story rather differently to all the sources cited above.

So credit to the ST for saying something, but there is a world of difference between their effort, and how the non-Murdoch media has covered it]
Posted by Tim Fenton at 14:38

Only a Texas woman would let that wizened old Nazi prune anywhere near her.

Texas is, after all, the headquarters of Yank fascism.

Great news that the All Blacks rogered the team Creepy Rupe "supported." I hope it gives the mad old gett and his racist hacks indigestion for weeks.

One way or another it's been a bad year for the Sky/News Corp/Fox Nazis....I'm glad to say.

Odd coincidence - nothing from the BBC.

Times "news"papers are full of them.

"His" side? But the USA got knocked out ages ago ;)