The Super Soaraway Currant Bun, the paper that brought us bigotry against the Irish back in the day, and when that became unacceptable, brought us bigotry against more or less anyone who was not white, and anyone who Spoke Foreign, has all too predictably decided to play the Paris attacks as a way of inciting hatred, while dressing it up as a legitimate polling exercise and a matter of national concern. 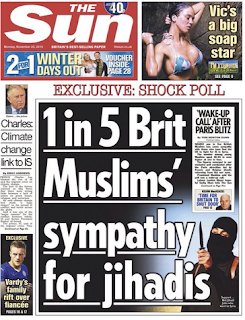 No they don't - read your own poll

So it is that we arrive at today’s front page “EXCLUSIVE: SHOCK POLL … 1 in 5 Brit Muslims’ sympathy for jihadis”, with non-bullying political editor Tom Newton Dunn contributing “‘Wake-Up Call’ After Paris Blitz”. In case readers do not immediately get the point, the Murdoch doggies have helpfully included a photo of “Jihadi John” brandishing a knife, to ensure they understand where that sympathy is being directed.

But, as Captain Blackadder might have said, there was only one thing wrong with this idea - it was bollocks. There was indeed a poll carried out on behalf of the Sun by Survation, but it did not reveal any particular level of sympathy for “jihadis”, which the paper wants us to believe means ISIS, or whatever they’re calling themselves this week. Fortunately, the poll detail has been made available to view (HERE).

The question that generated today’s front page headline was as follows: “Which of the following statements is closest to your view? … I have [a lot of/some/no] sympathy with young Muslims who leave the UK to join fighters in Syria”. But there are many groups that qualify as “fighters in Syria”, not least the Free Syrian Army (FSA). So the Sun’s conclusion is not mere exaggeration, but forthright dishonesty.

This has not stopped Newton Dunn, perhaps tapping away at the keyboard using the light from his burning trousers, telling “NEARLY one in five British Muslims has some sympathy with those who have fled the UK to fight for IS in Syria”. Did he go to the likes of Labour’s London Mayoral hopeful Sadiq Khan with that fraudulent observation? Perhaps he’d like to go back to the Tooting MP and come clean. Perhaps he doesn’t have the backbone.

And what the Sun is also not telling its readers - far more convenient to whip up fear of hundreds of thousands of traitors in our midst, eh? - is that Sky News (“first for breaking wind”) carried out a “British Non-Muslims Poll” last year, asking the same question. Those expressing either “a lot of sympathy” or “some sympathy” totalled 14%. Are they sympathising with IS, Tom? Are they traitors in our midst? Should we deport them?

Moreover, expressing sympathy - understanding why people take the action they do - is not the same as support. That has not stopped Kelvin McFilth whining “Those worrying suspicions that I harboured about the attitudes of young Muslim men in Britain towards the medieval madmen of IS have been confirmed” and suggesting that the entire population of Turkey wants to come to the UK. But he is at least predictably bigoted.

The Sun - bringing bigotry to its readers since the day Rupert Murdoch got his paws on the paper. Except now it’s moved on from Irish, blacks, gays, or non-English speakers. Pass the sick bucket.
Posted by Tim Fenton at 10:13

It's a toss up between them and the Mail as to who will be giving away black shirts with their "newspapers" soon.

Yes, and there's Kelvin Coward MacKenzie bringing up the rear with his "...worrying suspicions..."

Well, I've NEVER held any "suspicions" about either MacKenzie or Murdoch. I KNOW they're both gobshites. So is anyone who works at the Scum and doesn't speak out against them. Which on the evidence means every last one of them.

See, anyone can use their own propaganda methods against them.

Excellent post, and thanks for linking to the summary data.
Other aspects of the polling process are also questionable. It was a telephone survey, and the first question was "Are you a Muslim?" Only those who self-identified as a Muslim were then asked subsequent questions. This is obviously problematic. What was the

"Who's asking?"
"Survation."
"Never heard of them"

rate? (Or indeed the "Damn your impertinence" rate?). "Don't know" doesn't quite do justice to a legitimate range of other responses one might make faced with such a line of questioning.

Identity is a complex matter. Last I heard there was freedom of religious expression in the UK, so asking whether your British or Muslim identity is more important to you (Qu. 1) is a false dichotomy: you have a perfect right to be both, though whoever drafted the question seems to have been untroubled by this obvious difficulty.

Whilst I suppose the Sun can hardly sink lower, neither does this survey reflect well on the polling organisation which agreed to put these questions in this manner.

I've often wondered if the relative quietness of the likes of the EDL was down to the Sun and Mail increasingly doing their work for them.

Today's "Times" has the same misleading headline even though the actual article just states that "one in five" support people traveling to Syria without saying which side they would fight for.