Hardly had the first news filtered through yesterday evening of several apparently co-ordinated attacks on civilian targets by those claiming to represent ISIS, or whatever they’re called this week, in central Paris, with horrendous loss of life, than the punditerati opened up with a selection of variously stupid reactions, none of which would have any benefit other than satisfying the need of the right-wing press for yet more bloodlust.

Only shamed when he didn't get away with it

First to open mouth and insert boot in no style at all was disaffected Blairite John Rentoul, taking to twitter to use the attacks as a way of putting the boot into current Labour leader Jeremy Corbyn. “Will Corbyn say France made itself a target?” he asked grandly, only to show later that he was of less than perfect courage and delete the Tweet. He has since apologised, though one suspects that is for getting called out, not the outburst. 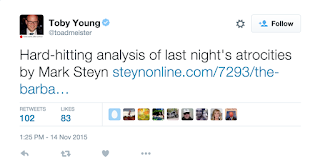 Why is there always a Bellend when you don't need one?

There was, sadly, rather more in the same vein. Just to show where his political sympathies lie, the loathsome Toby Young approvingly told “Hard-hitting analysis of last night's atrocities by Mark Steyn”. Steyn is a warmongering Islamophobe bigot whose report was signed off with “I'll be talking about events in Paris on Fox & Friends Saturday morning”. He’s a regular on Fox News Channel (fair and balanced my arse). 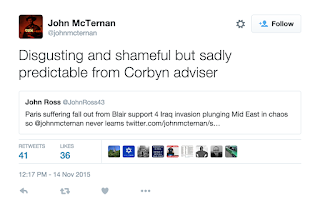 Meanwhile, just to show that Rentoul was not the only Blairite whose first thought was to use the attacks as a means of kicking Corbyn, John McTernan also took to Twitter to claim “Disgusting and shameful but sadly predictable from Corbyn adviser”. Over a hundred dead and scores in hospital, but all McTernan can think of is using the terrible events to promote his own cause. And he wasn’t the only one. 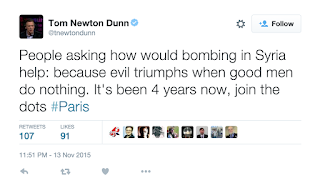 Your boss wants a scrap, he can pay for it himself

Over at the Sun, non-bullying political editor Tom Newton Dunn echoed the demands of His Master’s Voice with “People asking how would bombing in Syria help: because evil triumphs when good men do nothing. It's been 4 years now, join the dots #Paris”. Those dots, in the world of the Sun, include trying to connect the drone hit on Jihadi John with a series of attacks that would have been several months in the planning. 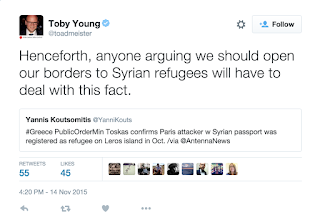 This is not any old fact - it is a Bellend fact

The Sun idiocy was joined by the Mirror and Mail too, helping to nudge the readers into thinking that some good might come from dropping even more bombs on Syria, despite the recent intervention by the Russians to do just that resulting only in many thousands more refugees. And that has allowed the loathsome Tobes to take a single uncorroborated source claiming that one of the attackers had been a refugee. 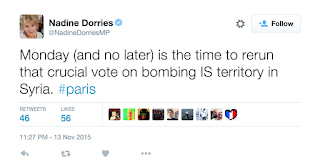 If in doubt BOMB THE BASTARDS

This allows lazy pundits to claim that ISIS is infiltrating refugee groups, rather than doing some journalism and finding if the story is true - or the passport genuine. But these are mere spectators: one Tory MP has Tweeted “Monday (and no later) is the time to rerun that crucial vote on bombing IS territory in Syria. #paris”. The name is Dorries. Nadine Dorries. She shows exceptional stupidity. And she has a vote in the Commons.

Had this convocation of idiocy been around during the Cuban Missile Crisis, we really would have had a war of nuclear annihilation. This is a time not for belligerence, but calm minds and cool heads. So none of the above need apply.
Posted by Tim Fenton at 17:39

You might think that today would be a bad time (assuming there is a good one) to run a Halal meat story. The Mail thinks otherwise.
"Parents' disgust after their children's primary school started feeding the youngsters halal meat"

Such tragedies bring out the best in most people and the worst in journalists.

We will soon, maybe as early as the coming week, witness the press howling down anyone who questions the government's coming expansion of powers for the spooks and resumed threat of air bombing.

Meanwhile, out of the Vienna some good news, diplomacy my have achieved a possible transition in power from Assad.

I won't leave my comment on whether Syria should be bombed or not to save Europe from further terrorist attacks.
I will, however, leave it to an educated Syrian man I interviewed who was left with little option but to leave his country and seek work elsewhere after some knob decided to bomb his town flat.

The truly scary thing is that @NadineDorriesMP doesn't even know that the previous Syria vote had nothing whatsoever to with IS! Good grief!

Even for this horrific atrocity, the Daily Mail and its content providers like Katie Hopkins, use the tragedy to attack their enemies --the BBC and Jeremy Corbyn. I suppose they just couldn't find a way to bring in the NHS?

Anyone'd think they were auditioning for the latest Hitler movie. Or for Murdoch's Fox News........

Man's inhumanity to man - something in which neither The Mail nor The Sun need any lessons.