Migrants - Thousands Of Them!

If there is one subject that tabloid hacks and their editors love, partly because it is one of the oldest and most reliable dog-whistle issues going, is migration, and especially immigration. Because immigration means “they” are coming here. “They” are different to Mail and Sun readers. “They” talk foreign. “They” are alleged variously to breed, not maintain adequate standards of hygiene, and not speak English to one another. 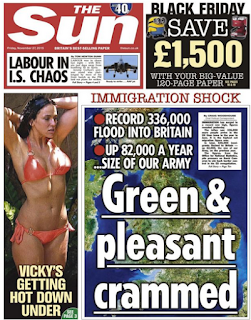 The inconvenient fact that “they” are coming to the UK because it is seen as a growing economy - those same papers that whine about immigration love to trumpet the Government’s spin on its record - and that “they” are prepared to work hard, therefore contributing to that economic growth as part of a virtuous circle that improves matters for everyone, is of course not told to the readers.

It was certainly not allowed to enter at the Sun, where Craig Woodhouse’s article was headlined “IMMIGRATION AT RECORD HIGH WITH 636,000 FLOCKING TO UK … Huge increase in number of Romanians and Bulgarians coming to Britain”. Yeah, all those flocking immigrants! Only further down the piece are readers told that 300,000 left the UK in the same period, but the frightener had been administered.

It got worse: “Immigration has surged to a record new high, figures revealed today, piling pressure on David Cameron to win back border control in his EU renegotiation”. Yeah, right. Free movement rules mean that pissing about with border controls would have no effect. Only at the very end does Woodhouse mention Young Dave’s daft pledge to get net migration into the tens of thousands. Because it’s the EU’s fault. 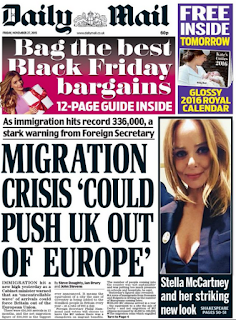 The Mail was equally horrified: “A new wave of immigrants from Romania and Bulgaria is behind the increase in the number of Europeans coming into Britain … Citizens of the two states, which joined the EU in 2007, now make up almost one in ten of all UK immigrants … Romania ranks behind only India and China as the country sending the most migrants to this country, an Office for National Statistics report said yesterday”.

This was reinforced by a suitably thunderous Daily Mail Comment: “At 9.30am, the Office for National Statistics released figures showing net migration to Britain was an utterly unsustainable 336,000 last year – an all-time record which is adding 920 people to our population every day … Net migration from inside the EU (over which Brussels allows us no control) was up by 42,000 to 180,000 – including, just as the Mail predicted, to sneers from the BBC, 50,000 Romanians and Bulgarians”.

Yes, it’s the BBC’s fault, as if we needed to guess. But nowhere do the Mail and Sun allow the obvious point to be made: a growing economy and the impression of opportunity are bound to attract migrants. Why else does the press think that so many made the journey across the North Atlantic to start new lives in the USA?

That argument is too complicated for the press. So frightening the punters into buying a few more copies it is, then. Sad.
Posted by Tim Fenton at 10:58

A good job the Scots, Welsh and Irish paid no attention to Little Englander propaganda isn't it, to say nothing of Commonwealth citizens, and, even earlier, Huguenots, Jews and Scandinavians. That isn't even a complete list. But without their historic input England would be less than a blot on the map. The same kind of thing applies to almost every other nation on the planet.

Paranoid racism and xenophobia remain the biggest threats to human advancement everywhere. In this country the Sun and the Daily Mail and their propaganda clerks are the most appalling obstructions to truth we have ever known. Given the genocidal thieving history of the British Empire, that's saying something.

much more than a "growing" economy (income per capita are not rising, certainly not for most workers), there are 2 main reasons for immigration

this makes it very attractive for first-job experience, educated youngsters and motivated adults from "poor" countries (whose median home country salary is less than half the UK median salary)

as for the "growing", please keep in mind that UK governments (of all stripes) have an addictive relationship with changing statistical rules to present a more amenable political reality.
most of the "growth" in recent years can be attributed to a "boom" fiscal strategy that rely on home and financial valuations, comparatively high budget deficits (still above 5% from 10-12% 5 years ago), low private sector saving rates (used for short-term consumerism) ..... and rising working-age population (thx to all those working immigrants)


when you stripped the statistics of all those elements, you realize that core, structural growth is rather anemic (which show why productivity is so lagging), and that today's "prosperity" is a lot like the 2002-2008

... good luck until the next financial/geopolitical crises erupt ...

500,000 plus people die every year in the UK from natural causes. Migrants help keep the joint ticking over. You would think ghastly exponents of unbridled capitalism like the Mail & News Corpse would welcome more customers for the system to self propagate & survive. Fools.

Of course the other point ignored by the wailers in the tabloid press is that the withdrawal of rights to benefits HAS HAD ZERO EFFECT. Its almost as if the motives of migrants was completely the opposite to the caricatures of them portrayed in the Sun, Mail and Express.