Those papers that provide a conduit for the spooks, or advocate for them to be given ever-greater powers, were in buoyant mood today. “British spies uncovered Isil bomb plot … Tourists returning from Sharm el-Sheikh today told to leave luggage behind as aircraft security is tightened” proclaims the Telegraph. The Murdoch Times concurs: “Spies think Isis blew up plane with bomb in bag … Luggage banned from hold as evidence grows”. 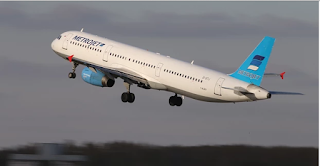 The aircraft that crashed, Airbus A321 EI-ETJ

And, as Beckermann’s widow tells Charlie Croker in The Italian Job, “it wasn’t an accident” that at the time when the public’s support for the spooks needs that vital shot in the arm, there it is all over the front pages of what still pretend to be papers of record. What those same papers are not telling is that whatever the spooks have discovered while listening in to Isis, or whatever they’re called this week, it has little relevance to spying in the UK.

No warrants had to be obtained to snoop on the alleged terrorists, no judges or politicians had to intervene, no law had to be passed or amended. It was just the routine stuff of eavesdropping on the apparently careless chatter of others. And, while the sudden breaking up of a modern airliner in mid-air, and the wide spread of wreckage on the ground, are consistent with the bomb theory, it is not yet proven. 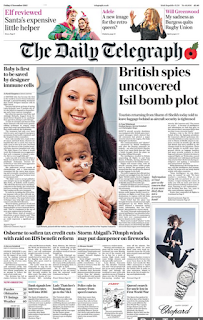 That is, unless the contents of both the Flight Date Recorder (FDR) and Cockpit Voice Recorder (CVR) of the Airbus A321 have been read back, and whatever they revealed has been passed on to British authorities - in which case, it’s got absolutely bugger all to do with whatever the spooks picked up while listening in to what may be nothing more than a bunch of Jihadist nutters somewhere out on the Sinai.

Moreover, if our authorities have been leaked the FDR and CVR information - and it’s a big if, given the CVR was badly damaged in the crash and might therefore be expected to take  some time to read - the Russians, where the airline is based, and the Irish, where the aircraft was registered, will have something to say about it. And it’s not the only point on which the Russians might want to take issue. 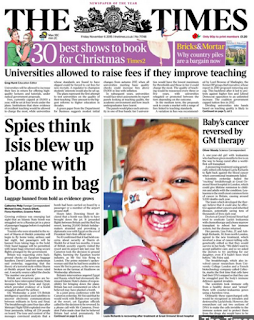 When was this “chatter” intercepted? If the intercept was made before the plane was brought down, the Russians will justifiably be bloody angry that nobody told them. Even if it was only made in the last couple of days, again, why are we not sharing it with them? It was, after all, more than 200 of their citizens who got killed on that flight. If it’s bad enough for Young Dave to wade in and stop flights to Sharm, it’s bad enough to share.

Whatever the answers, there is no mileage in this for the spooks, and the press should not be pushing it as such. Nor is there any reason yet to claim that a “bomb plot” has been “uncovered”, or that “evidence grows”. But it’s interesting to see the right-wing press talking up the spooks, slavishly recycling the Government line, inflating what little evidence they have, and frightening the punters into buying more papers, all at the same time.

This terrible, murdering tragedy has once again exposed Brit mainstream media - particularly the press - at its hypocritical worst. It almost goes without saying Murdoch's hacks are the worst of the lot. The Vauxhall Cross/Langley hoodlums must be laughing all the way to their latest class in the Josef Goebbels School.

Note the difference of treatment to the destruction and mass murder of the airliner and passengers over Ukraine and this one. To say nothing of the US shooting down of an Iranian civilian airliner over the Gulf.

Just when you think you've seen the worst you get this kind of sick opportunism. The Friends at Vauxhall Cross must be paying out an awful lot for this disgusting lunacy. Not that you'll ever see the Intelligence Select Committee even posing questions of their activities in media propaganda: so don't hold your breath.

Operation Mockingbird lives. But in another name.

AsI understand it, the "chatter" was recorded before the plane was destroyed, but not listened to until afterwards. Just how old is the proverb about horses and stable doors?