The deliberate attempt by the Murdoch Sun to demonise Britain’s Muslim population by pretending that “one in five” of them supported ISIS, or whatever they’re called this week, has still not resulted in any kind of retraction or apology, despite the widespread revulsion at the story - and the revelation that pollsters Survation have distanced themselves from the exercise. Nor have their hacks been prepared to face the rest of the media. 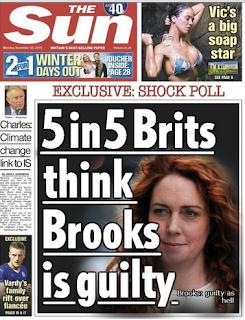 Guilt by poll interpretation not universally popular at the Sun

So the perpetrators - editor Tony Gallagher, non-bullying political editor Tom Newton Dunn, who wrote up the story, and managing editor Stig Abell - have all kept schtum. Instead, when Channel 4 News featured a discussion on the affair yesterday evening, the paper was represented by former Sunday Times hack Eben Black, now alleged to be in PR, whose performance typified the very worst in journalism.

Perched awkwardly on his chair, with his over-nourished frame testing the limitations of an ill-fitting suit, Black oozed calm, assurance, and total bullshit. The Sun’s editorial line was effortlessly replayed: everyone would have known what “fighters in Syria” meant. We should take this as read. Naz Shah, newly elected MP for Bradford West where she disposed of George Galloway, was clearly aghast at the idea.

It got worse: it was nothing serious, Black told, and nothing more than an effort to sell a few more newspapers. We should not find this so surprising. Well, yes it is partly an exercise in flogging more copies, but doing so by indulging in borderline racial and religious incitement is not something to get relaxed about. The Sun has effectively told its readers that hundreds of thousands of terrorist sympathisers are out there. 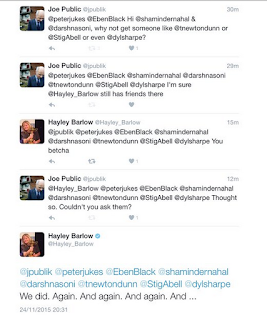 In doing so - and, as Ms Shah pointed out, not putting alongside their poll an earlier exercise showing that a double-figure percentage of non-Muslims also had a degree of sympathy with those going to join “fighters in Syria” - the Sun has very deliberately constructed a false and poisonous narrative with the apparent intention of creating its own news, not unlike Fox News Channel (fair and balanced my arse).

Worse still is that not only can the Sun cower behind the effortless dishonesty of Eben Black, but also that there will be no formal censure, let alone penalty, for this disgraceful behaviour. Although, as Brian Cathcart has pointed out, the front page splash was a flagrant breach of the Editor’s Code of Practice - “The press must take care not to publish inaccurate, misleading or distorted information”, there will be no fine, no reprimand.

Why so? Ah well. There is no one individual named in the article. This enables sham “regulator” IPSO to dismiss most, if not all, of the well over 1,000 complaints that have so far been received. So they will get away with it. If only the same could be said for all those in Muslim communities across the country bracing themselves for hate attacks from those gullible enough to believe the Sun’s vicious exercise in bigotry.

And remember - Gallagher and Newton Dunn haven’t got the spine to explain themselves. Nobody at the Sun has. What a complete and absolute shower.
Posted by Tim Fenton at 10:56

" There is no one individual named in the article. This enables sham “regulator” IPSO to dismiss most, if not all, of the well over 1,000 complaints that have so far been received. So they will get away with it."

But if someone shouts "Fire" mischievously in an auditorium and causes a panic they don't name an individual? Katie Hopkins calling of "cockroaches" didn't name individuals. This was a problem specifically addressed by the Leveson Inquiry.

If IPSO cannot deal with it what are they there for? Oh silly me, I forgot they're there to protect the "newspapers" interests.

Onto the next shoot out at The Last Chance Saloon. Only for defunct dinosaur newspapers read mainstream media online.

Glad you got onto the Black bullshit on C4 News. Actually, the shiny suited slob was a perfect representative of Murdoch's propaganda coward clerks. No morals, not even a scent of decency, just a sales effort. Precisely why many people have nothing but contempt for mainstream media.

If you wanted any further confirmation of how bad things are all you had to do was watch in the same programme Hilsum's (latest) disgusting far right propaganda piece on the shooting down of the Russian jet. Alex Thomson managed to get a few words of relative dissent in, but he was swamped by the editorial agenda.

C4 News has largely become a laughing stock, particularly when Hilsum, Rugman, Miller, Mason and Frei are let loose by De Pear and his editorial lackeys. It was once possible to say C4 News was the least worst. Now you can't even say that about it - in many respects it's the worst of the lot.

Which is why I wasn't in the least surprised at the appearance, performance and cuddling of Black. All the C4 News front men and women need to take a good long hard look at themselves instead of cowering at the threat of privatisation they now face. There may have been a time when Snow had some affect, but that has long since gone as his retirement draws near.

I believe it was Richard Peppiatt (who blew the whistle on life at the Star) who said "The beat of a butterfly's wings in the Amazon basin may cause a hurricane in the Atlantic; likewise, a headline printed in London may cause someone in Huddersfield to have their head kicked in down an alley".

Of course though, should anyone come to harm based on someone reading this headline, it'll be Mad Mel and Anders Brevik (or Richard Littlejohn and Sophie Lancaster/Lucy Meadows) all over again - taken out of context and tomorrow's fish wrapper, mate.

All this inflammatory muck spreading in the media is beginning to worry me. There is an appalling load of rubbish written by Allison Pearson in the Telegraph today. (Inspired by Frances Barber's "Uber incident". She has form for tweeting while pissed BTW.) Pearson states that "London has been completely changed due to Muslims." This is just lies. I was there on Monday and it looked the same as it always does.

They don't give a toss about the consequences of their actions: thanks to them we have more chance of civil disobedience than being shot or blown up.

Of course not. This is about class as much as it is about race and religion, and they don't live on, or ever go near, the estates where the trouble will flare up.

It's worth noting that 'The Sun's' front page got over 1000 complaints yet IPSO will probably not investigate yet on the same day Jimmy Carr told a joke about dwarves on the BBC which attracted two complaints and that will be investigated by OFCOM. It looks like Murdoch is getting his reward from Cameron for helping swing the election to the Tories. Extra regulation and scrutiny for the BBC very little scrutiny and regulation for Murdoch.

At least the Sun's sister paper, The Times, has now admitted that its headline was misleading (i.e. wrong) and has published a retraction in it's corrections column.

It's all fine, nothing wrong with the Sun's reporting of that. I know because Stig Abell wrote a letter: http://www.theguardian.com/media/2015/nov/25/the-sun-did-not-spin-its-headline