In the wake of the furore surrounding the Russian airliner that crashed in the Sinai, and which may have been brought down by a bomb, our free and fearless press has decided that there is mileage to be made out of Sharm el-Sheikh scare stories. And no-one does cheap and nasty scare stories better than Rupe’s downmarket troops at the Super Soaraway Currant Bun, as their front page today demonstrates. 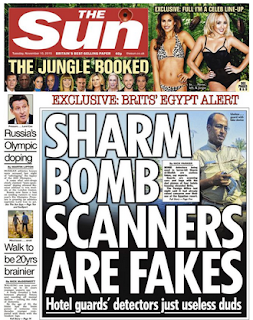 “The Foreign Office last night said it had already raised concerns over their use at the Egyptian resort”. Woah, terrible, eh? Well, maybe not so terrible: had there been a lapse in security leading up to the downing of the Metrojet flight taking more than 200 holidaymakers back to St Petersburg, it would have been at Sharm el-Sheikh airport, not at a hotel. But here a problem enters.

The Egyptian authorities are not letting journalists into that airport at present, such are their concerns over security. Broadcasters like the BBC and ITN can’t get access, so the Sun’s hacks have no chance. And that is where the real story would be. Then there is the claim “say experts”, which suggests the Murdoch faithful do not have enough evidence to just come out and say it.

On top of that is the idea that the British holidaymakers are all “stranded”. Many are quite happily continuing their holidays, ready to deal with the business of getting back home when the time comes. And the Sun’s screaming headline would be a lot more convincing if there had been concerns raised in the past about security around the resort of Sharm el-Sheikh - which there had not been.

Well, not enough to warrant the Sun turning up mob-handed, anyway. That is, of course, if the Sun has actually sent someone to Sharm el-Sheikh, and if they have, how did they get out there, given the suspension of flights? More likely is that this “exclusive” is cobbled together from some wire copy and photos. So it’s only “exclusive” because nobody else wanted to run it. And nobody should bother with it.

Why? Well, the Brits who are still out in Sharm el-Sheikh aren’t going to be alarmed, nobody else is going out there until the security situation is clarified - which could be into the New Year - and most punters will be focusing on getting ready for Christmas. But of course there is one group who will put great store by running this rubbish - the Sun’s hacks, who will put any old frightener on the front page.

That’s because flogging a few more copies is all they care about. No change there, then.
Posted by Tim Fenton at 08:53

In The Sun's haste to print this story they have probably had no time to print the real story that Greg Miskiw has been giing Byline (author Peter Jukes) ""Miskiw Confirms: News of the World subverted Murder Inquiry on behalf of Murder Suspects". A murder mystery involving The Met,ex cops,NOTW, Becky Wade/Brooks - a sure fire winner in the Raymond Chandler tradition if it were fiction but sadly it is not.

Missed opportunity perhaps? Or are Sun hacks happier with fiction.

Of course it's no coincidence the same page carries the story of "Russian" sports doping and cheating. It runs in parallel with the pathetic attempt to get the football World Cup out of Russia. By comparison, Sharm El Sheikh is a minor adjunct, useful only for keeping Murdoch propaganda hacks in their zero hours jobs for another day.

It's all of a piece. And so obvious it's farcical. None of them could give a brass shit about the underlying unspeakable tragedy of it all.

But they're not on their own. For instance,last night C4 News carried a piece fronted by the rapidly decaying Jon Snow in which he described the London Olympics as "glorious." Obviously those nasty Russkis were out to "sabotage" the whole event, even the memory of it. At any moment I expected the poor old sod to spring to his feet, live on air, right arm extended, shouting, "Sieg heil!" Shades of the Nazi Olympics and its propaganda "value." Other broadcast news is no better, some of it a great deal worse.

Short of an all out NATO declaration of war on Russia, there will be non-stop propaganda attacks on that country. If you want to see how this will be done all you need do is research British print media in the three years leading up to the First World War.

In the meantime the downing of the Russian airliner is merely propaganda-useful, not a dreadful tragedy. And in the case of Murdoch hacks on the lowest level, just another opportunity to keep their cowardly arses on his payroll.

The fake scanner claim may be true, and a possible ID for their "experts" could be the BBC.


fake scanners sold by British con artists were reported to be in use at Middle East hotels. Of course, if it is true then Murdoch's band of roving arseholes will have to explain how the soft, leftie BBC was on the case way 13 months before them!

Anyone who has been to Egypt will tell you their security is red hot.Since the shootings at the Temple of Hatshepsut they have made tourist safety an absolute priority with armed guards etc.

I travel all over the world and the airport with the slackest security I have found is Los Angeles. I once went through the security screening (with a load of other people) and it was unattended! US airports also have the insane policy of letting US military personnel onto aircraft without any security screening: it wouldn't take too much trouble to obtain some army fatigues and a fake ID.