So the shale gas industry is being welcomed to the UK: the Rt Hon Gideon George Oliver Osborne, heir to the Seventeenth Baronet, is looking to give “significant” tax breaks and even create a one-stop Government regulatory and licensing shop to encourage exploration. Those who contend that climate change is not happening and wind power is rubbish are as a result ecstatic. 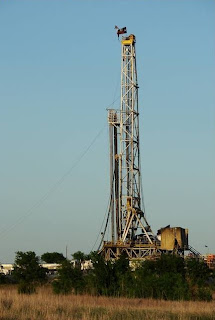 Among those people are the critics of wind power who complain vociferously about subsidies, although they have no problem with the phrase “tax breaks”, which is another way of saying that shale gas is going to be subsidised. Nor will there be any problem with the hydraulic fracturing process for those in whose backyards the drilling won’t happen. Nor will there be any concern about the waste of water.

Each fracking of the rocks requires millions of gallons of water, which in turn contains chemicals. One solvent used in wells in the state of Texas recently has been linked to kidney and liver damage. Others are believed to be carcinogenic. None of this has appeared in a blatantly cheerleading article in the Maily Telegraph by Matt Ridley, who is concerned only with the thought of lower bills.

But that depends on reserves being economically viable, and over a sustained period of time: many wells in Texas are not sustaining output beyond their first year, and in the Blackpool area alone it is estimated that as many as 800 wells may have to be drilled. To many residents, this thought clearly does not occur: they must think it’s like coal mining, with one shaft being sunk. It is anything but.

This has caused local Tory MP Mark Menzies to stress that, despite his support for shale gas exploration, there must be effective regulation and that residents must be consulted on developments. That realisation could come much closer to home for Osborne soon enough: his Tatton constituency sits over shale beds which could prove very attractive to the shale gas business.

And, as Oliver Wright at the Indy has pointed out, the voters might routinely return Tory MPs with thumping big majorities, but had no compunction in dumping the deeply ambiguous Mostyn Neil Hamilton over his less than upstanding conduct and association with Mohammed “you can call me Al” Fayed. And, despite their liking for air travel, there was serious opposition to Manchester Airport’s second runway.

So if dozens of wells start up in what is a mainly agricultural area, Osborne’s enthusiasm may not be sustained. And if the water contamination that has apparently followed fracking in the US follows, that will make the locals more than sceptical. None of this seems, though, to be getting through to the right-leaning press, who simply call fracking a “trillion pound industry”.

That, of course, does not mean we necessarily need it here. Just a thought.
Posted by Tim Fenton at 15:27

The reason Shale gas is cheaper in the States is that it is consumed locally and isn't connected to any grid distribution. Therefore there is a no way to get it to world markets where the price is much higher.

This would not apply to any shale gas from the UK, where the world market price will apply.

I've seen a few blog entries go by in the past month or so, about the relative risk to water supplies from fracking in the UK.

There seem to be a fair number of geologists who reckon it would be safe if carefully managed. The fact that non-specialist supporters consistently push the economic angle over all others does not inspire confidence.