Max Clifford And The Facts

So Operation Yewtree – launched following revelations about the past life of Jimmy Savile – continues, and another well-known name is nicked. Yesterday’s addition to the roll call of the famous was Max Clifford, PR and damage limitation expert to many others. And, no doubt following the Leveson Report, the press were reporting the event more or less straight for once. 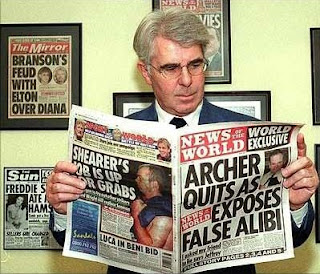 Happier times for Max and the Screws

That is, except for one thing: there was an insistence on linking Clifford with Savile, if only because the same team did the arresting. But the Police stressed that Clifford was being questioned under the third strand of Yewtree, that being “alleged complaints against other people unconnected to the Jimmy Savile investigations”. So the first thing we need to do is ignore the supposed Savile connection.

So what do we know about this case? The great Cliffus Maximus has had a long and colourful career, from being a publicist in the music business in the early 60s to his current position as scandal concealment specialist extraordinaire. He has a contacts list that includes politicians, business folk, sports personalities, people from across showbusiness and the media, and those giving personal services.

Yes, you read that last bit correctly: Clifford knows more than one, shall we say, “madam”. It was, after all, through his good offices that the story of Pamella Bordes and her apparently simultaneous dating of Andrew “Brillo Pad” Neil, Donald Trelford and others was fed to the press. Ms Bordes was, as upmarket folks like to say, a “call girl”, or in ordinary speak, a prostitute.

I mention this aspect of the Clifford CV not for cheap titillation, but because there are already rumours circulating that the arrest may have had nothing to do with what he himself got up to. As a recent video shows, he may have caused potentially damaging revelations about others to be swept under the carpet. That in itself is an offence, but that is not why he was questioned yesterday.

As the New York Times has confirmed, Clifford was arrested in connection with two specific alleged offences dating from 1977. His own memoirs, previewed in a piece for the Observer magazine back in 2006, include the confession of serial womanising over many years. He organised sex parties in the 70s and 80s. As he put it, everyone was at it. Including him.

After leaving Belgravia Police station last night, Clifford told reporters “Anyone who really knew me all those years ago, and those who have known me since, will have no doubt that I would never act in the way I have today been accused”. But of course we don’t know how he was accused of acting. So that’ll be lots more nudge-nudgery and you should beware of pundits dropping heavy hints in the coming weeks.

But Max Clifford is not another Jimmy Savile – end of story.
Posted by Tim Fenton at 10:09

Simon Cowell is the new Savile.

As the woman behind the bar said in Brief Encounter, I'm sure I don't know to what you are referring.