Not in living memory has there been such a long list of deserving contenders for the coveted BBC Sports Personality Of The Year (SPOTY) award. We had the Olympics, Paralympics, the Tour de France winner, a Grand Slam tennis champion, as well as a miraculous Ryder Cup win for Europe and a cricket team on the verge of putting one over on India in their own back yard (since confirmed, folks). 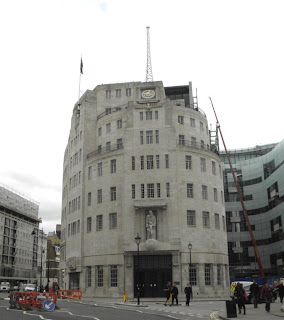 So few begrudged the BBC coverage running over by the thick end of half an hour, as viewers got to relive the most magical sporting year in living memory. We put on the best Olympics and Paralympics ever. Oh yes we did. And in the year of the Queen’s diamond jubilee, too, which event made it all the more fitting that Catherine, Duchess of Cambridge should be there to present the main award.

But there was also mileage for hacks and onlookers here, and mainly in honing the skill of praising the athletes and the occasion, while laying into the Beeb. The Telegraph led the way, first with the straight reporting “Bradley Wiggins wins BBC Sports Personality of the Year 2012 capturing the hearts of the nation”, and then bringing in pundit Iain Martin to provide the spin.

“Well done Bradley Wiggins, but the BBC was way over the top” whinged Martin, getting his snark in and – as with just about every other commentator – missing such minor items as the hundreds of Games Makers who had sensibly been invited to celebrate a sporting year for which they had all given so selflessly of their time and energy. But at least Martin was unequivocally supportive of the athletes.

This was not the case over at the Mail, where there was suitably grovelling Royal praise for Kate’s appearance, but a gratuitous and nasty amateur fashionista attack on many of the athlete’s outfits from Liz Jones, whose carping at Rebecca Adlington, Louis Smith, Katherine Grainger, Sarah Storey and Nicola Adams was bang out of order. That she will have been paid for this drivel is a minor miracle. 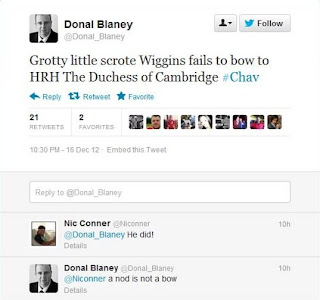 Even the Super Soaraway Currant Bun was happy with the outcome, especially as Kate was there. But the triumph of ordinary everyman Bradley Wiggins was not universally praised: head of the Young Britons’ Foundation Donal Blaney was aghast. “Grotty little scrote Wiggins fails to bow to HRH The Duchess Of Cambridge” he sneered. Wiggins is not shorter than Blaney. 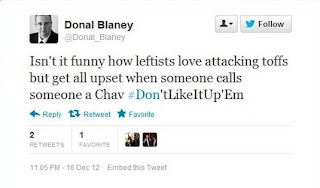 Moreover, Blaney’s increasing girth over time would give him difficulty mounting and successfully moving a bike for more than the odd couple of miles, let alone competing on one. But he remained unable to take the hint, maintaining that anyone finding adversely on his preposterous outpourings was a “leftist”, rather than someone who had correctly identified him as a complete prat.

Such is the vacuousness of today’s punditry, whatever its chosen media.
Posted by Tim Fenton at 10:56