The Sun’s routinely confrontational political editor Tom Newton Dunn has today accused someone else of being, er, routinely confrontational: he has cobbled together a smear on Radio 4 Today presenter Evan Davis, following an interview with the Rt Hon Gideon George Oliver Osborne, heir to the Seventeenth Baronet, which did not result in a meeting of minds over the Autumn Statement.

Osborne had contravened the Galbraith dictum (“A leader can compromise, get the best bargain he can. Politics is the art of the possible. But he cannot be thought to evade”) and Davis, who is generally awake at that time in the morning, rumbled him on the spot. Voices were raised. Osborne had been caught out evading. But, as is all too typical with today’s politicians, the Government complained. 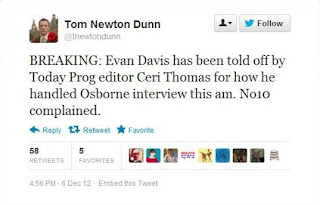 Newton Dunn was tipped the nod about the complaint, and instantly assumed that Davis would be subjected to a Grade A bollocking from Today editor Ceri Thomas, if only because the Super Soaraway Currant Bun has decreed that the Tories are Very Wonderful Politicians, and that the BBC are a bunch of Rotten Lefty Fellow Travellers. So he proclaimed the news to Twitter. 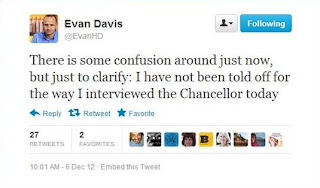 Sadly, Newton Dunn was proclaiming a pile of steaming bullpucky, as was demonstrated when word got back to Davis and he in turn Tweeted that “I have not been told off for the way I interviewed the Chancellor today”. His version of events was supported by the BBC press office, which was then confirmed by James Lyons of the Mirror, although he had trouble smelling his worms. 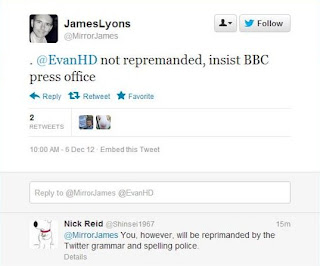 So it was back to Evan Davis, who confirmed to Neal Mann of the WSJ that no, he had not been “told off”, or even reprimanded, as it is called at the Beeb. This showed plainly that Newton Dunn had been trying to pull a fast one, and so it might be thought that the Sun man would at this point bow out and go in search of something factually correct. But such a thought would have been misplaced. 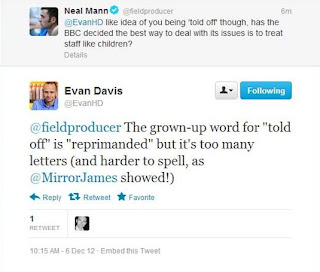 Because, after pausing to apologise to Davis, Newton Dunn changed tack and suggested to him “there has been a conversation with your editor about it after No 10 rang, fair to say?” which of course would be rather less newsworthy if true, as Thomas and his presenters have conversations about all manner of things, such as their running order for the day’s show, which is hardly headline news. 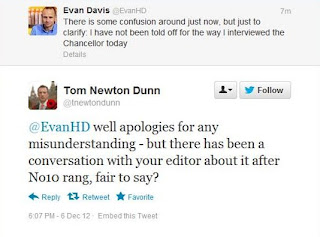 And it was that Tweet which was inflated to provide today’s story, where Newton Dunn proclaimed “Last night it emerged Mr Davis had been ‘spoken to’ by Today editor Ceri Thomas”. So Sun readers get the nudge-nudgery as Rupe’s downmarket troops intend, while remaining blissfully unaware that the bloke writing the story got it wrong and had to apologise.

But the approved Murdoch version is what was printed, so that’s all right, then.

[UPDATE1 1615 hours: the Mail, being as fond of Beeb bashing as the Sun, has decided to get in on the act by telling that Evan Davis "was under fire last night". Their piece also asserts that Davis was "said to have been 'spoken to' by managers", but they have also invented something not in the Sun report.

"Downing Street is thought to have received an apology" the piece concludes, which means they don't know. Neither Tim Shipman (lobby chairman) nor James Chapman (political editor) has mentioned the story on Twitter, which is strange if it involves some insider knowledge.

Most likely the Mail story is inflation and exaggeration - to fit the agenda of the legendarily foul mouthed Paul Dacre. No change there, then]

[UPDATE2 8 December 1825 hours: the Mail is at it again, this time with Amanda Bloody Platell, who has claimed that "The BBC apologised after" the Today interview. They did not. As the Guardian noted, it was conceded to Craig Oliver, Young Dave's current chief spinmeister, that things "could have been better handled", but apology there was none.

It was also confirmed by the Beeb's press office that Evan Davis had not been reprimanded. This point was also conceded by the Maily Telegraph, whose piece further confirmed that there had been no apology. Such factual inconveniences are clearly no obstacle to Paul Dacre and his Glendas]
Posted by Tim Fenton at 11:59