Nowhere is the insularity and ignorance of the Fourth Estate more visible than when they start to bang on about travel, another subject where most hacks and editors come over all clueless unless a third party serves the information up to them. And, as the pre-Christmas getaway starts in earnest, the Maily Telegraph has demonstrated that it can do cluelessness as well as the rest. 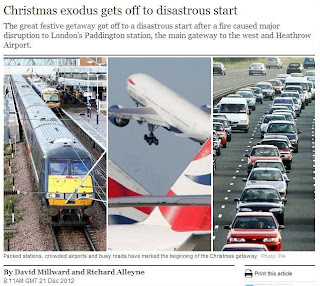 London-centric bad journalism gets off to disastrous start, indeed

“Christmas exodus gets off to disastrous start” screams the headline, which will come as something of a surprise to anyone in my part of the country. There’s some replacement of trains by buses following local flooding, but that should be sorted later today. The A34 has also been hit by floods, but the motorways are OK and traffic is moving reasonably freely.

This, though, does not occur to the Tel, which suffers from the mentality that says, roughly, that because their offices are in Canary Wharf, the only travel news that matters is the latest foul-up on the Jubilee Line, the roads being clear for those executives who cannot bear to be other than chauffeured, and the availability of easy access to long haul flights from Heathrow.

But there has been disruption to the Heathrow Express this morning, so panic has set in at the Telegraph. To illustrate the problems at London’s Paddington station, a photo has been used which shows a station which is (a) not in London, and (b) not on the line west out of Paddington (first glance suggests it’s Peterborough, which is 76 miles north of London). So far, so clueless.

But one can travel to Heathrow by Tube. So the Tel panics the readers yet more by telling of a signal failure on the Jubilee Line, which is stuff all use to prospective air travellers as Heathrow is served by the Piccadilly Line. And the news that lots of people are due to fly in and out of London’s busiest airport is not news: lots of people travel through it every day of every week.

That the hacks’ panic is just that is underscored later in the piece when it is admitted that many rail operators are actually seeing lower numbers travelling right now, as many commuters have taken an extra couple of days off and that has not been matched by the increase in those off to see friends and family. Eurostar is carrying lots of passengers, but without any problem.

So perhaps the Telegraph could join most of those in the real world and chill a little. And get itself a decent picture editor – that motorway photo wasn’t taken in December.
Posted by Tim Fenton at 10:39