In another demonstration of London-centric behaviour, those at the Maily Telegraph and its Sunday stablemate have gone into their obligatory annual why-oh-why-fest over the cost of rail travel, on which so many of their hacks depend, but which is rather less of an expense to those of us who tend to commute over shorter distances, or work where there are alternative means of transport available. 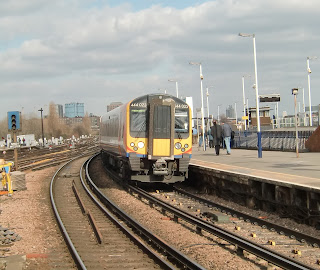 “Rail fares have gone up 50 per cent in the past decade” is the howl of protest masquerading as a headline, followed by the highly questionable “no perceptible improvement in services” assertion. Fare levels, whatever the protests about management pay or drivers’ hours, are mainly down to the policy of all main political players that passengers should pay more of the total cost.

In other words, were these to be lower, that would mean more subsidy, often from those who don’t use the railway. And as to the assertion that services haven’t improved, well, I can only speak from my own experience, and based here in Crewe have to say that this contention is total crap. For starters, in the past decade, Virgin Trains has put a complete new fleet of trains into service.

And so has regional operator London Midland, which provides services to Liverpool, Birmingham, and a slower but cheaper one to London. On top of that, Arriva Trains Wales has switched newer trains to its Manchester – Crewe – Cardiff route, and has refurbished the rest of its fleet. East Midlands Trains has also refurbished its trains. Cross Country has mainly new trains with a few refurbished ones.

Service levels are at least as good as in 2002 – the Birmingham to Crewe and Liverpool route has seen a doubling of frequency, we get four trains an hour to Manchester on weekdays, there are three an hour to London and hourly services to Scotland – and reliability is better. Timekeeping is certainly no worse than a decade ago. Passenger information is better. Stations are generally more pleasant.

But there’s no pacifying the Tel, where Jake Wallis Simons (one of their features writers) has thundered “It’s time to bring the railway bandits to justice”. His main gripe is that his annual season ticket costs £4,372, which sounds a lot until you realise that he lives in Winchester. This means, assuming 240 round trips per year, that he pays £18.22 per return journey, or 13.4 pence per mile.

On top of that, South West Trains – who run the services from Winchester to London – have in the past decade taken delivery of a brand new fleet of trains from Herr Siemens, including the Class 444, arguably the best new build medium-distance electric multiple unit on the network. That’s the unit that provides Simons’ service for him. Compare and contrast with the cost of running a car over those distances.

Some folk don’t know their good fortune. Even if they do work for the Telegraph.
Posted by Tim Fenton at 12:04

We usually get 323s on our Northern Rail services in Crewe, which are relatively recent build and have been gradually refurbished.

But we do occasionally see Pacers, and yes, the London based hacks don't have to suffer anything like that. And yes, their protests on fares would be a lot more credible if they did.

As a regular long-distance traveller this post seems out of touch. Taking x-xountry as an example, there have been years of above inflation fare rises but what 'improvements' have there been? Well there's been the following changes:
All buffets ripped out and replaced by inadequate trolleys which run out of food 30 mins out of new street.
Huge reductions in the number of direct services for which demand clearly exists (NW-SW for example) forcing passengers to change at an overcrowded New St.
New trains on the route that are vastly inferior to what they replaced - minimal overhead luggage space, few seats at tables (an essential when travelling with children, not a luxury) and a constant drone from the underfloor engines whereas before it was quiet.
*Hardly* an improvement for a 5-7 hour journey!

As a former Cross Country weekly commuter (CRE to BRI before you ask), I too recall what came before the Voyager trains. So I understand what "Joe Lucas, Prince of Darkness" means (for the uninitiated, that's ex-BR mark 2 coaches, which was a substantial part of the XC fleet).

Buffet provision was part of the service specification that Arriva decided to bid to remove when they pitched for the franchise. You want those, you pay more. Ditto sufficient room to have seats round tables, which plenty of families manage without, which is as well given that it is not just on XC that there are less of them.

As for changing trains in Birmingham - that was always the case for some passengers. When the NW-SW services were still running, I reckon at least 80% of passengers left at BHM, with a corresponding number replacing them.

And as for "vastly inferior", I've had this discussion for years now, and if I had a tenner for every time I'd been confronted by an opinion with no material evidence to back it up, I'd be a rich man by now. For every punter who whines about Voyager trains even before they get aboard, you can find another who likes the trains, and yet another who couldn't give a stuff.

Moreover, the Telegraph man was commuting into London, and XC don't do a lot of that. Just a thought.

The cynical would of course say that XC's business case, operations and approach to ticketing offered is entirely based around middle-distance journeys, and 'stuff' to the few fools like me who are on them for 5 hours plus... Seems a pity there is no coordinated approach to service standards nationally, when the product offered on London-the NW and the NW-Edinburgh has indeed improved greatly.

Tim, as a railwayman I can fill a fair few pages on why the fare rises are uncalled for, but in short this country has for decades had a disastrous transport policy and this is unlikely go change.
I am sure you would agree on both the social and economic benefits that a joined up, forward thinking policy would bring.

Sure, although the Telegraph hack whining about paying less for his season ticket than a small car would cost just for fuel is still coming it.

Problem is, every time a General Election comes round, voters never prioritise PT very highly. Maybe that will change, but it would need to become a nationwide issue, and not just a London or South East one to propel it up the board (and of course it's about more than rail commuting).