You’ve all seen the scene at the end of Diamonds Are Forever, when oddball villains Mr Wint and Mr Kidd are rumbled by their not knowing that Château Mouton Rothschild is a claret – and of course the aftershave: “I’ve smelt that aftershave before, and both times I’ve smelt a rat”. Sadly, more than 40 years on, there are still those whose proficiency in oenology can be found wanting.


And, despite their propensity for consuming anything alcoholic, it is the rabble at the Guido Fawkes blog who have inserted foot in mouth so clumsily on this very subject, during at attempt to have a snark at Foreign Secretary William ‘Ague. The Fawkes folks have discovered that the Foreign Office (FO) on occasion serves upmarket wine with their nosh (something everyone else already knew). 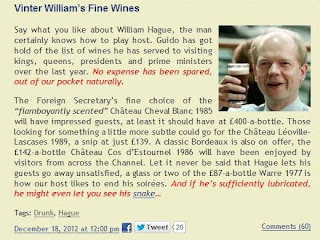 The post goes awry at the very beginning, proclaiming “Vinter William’s Fine Wines”. Vinter? What that? Vinter is Old Norse for – you guessed it – Winter. So nothing to do with wine, then. Perhaps they meant Vintner, which may be interpreted as “Wine Maker”, or for the purposes of the Fawkes folks, “Wine Merchant”. And the rest of the post doesn’t get much better.

The range of wines that has been served by the FO is at least accurately described, these including Château Cheval Blanc 1985 and Château Léoville-Lascases 1989, but then readers are told that “A classic Bordeaux is also on offer, the £142-a-bottle Château Cos de l’Estournel 1986”. Well, Château Cos de l’Estournel does indeed fit this description, but is merely a Deuxième Cru.

That is, it is a second division player according to the original Bordeaux wine classification of 1855. But then, so is Château Léoville-Lascases. And Château Cheval Blanc is a Saint-Emilion Premier Grand Cru Classé A, one of the top rank of that area’s red wines. And Saint-Emilion is a Bordeaux wine region. So all three of these wines fit the description of “classic Bordeaux”.

And as if that isn’t bad enough from the Fawkes rabble, they illustrate the post with a photo of William ‘Ague that is not only well out of date, but which shows him holding a tipple that is definitely not “classic Bordeaux”, or indeed any other wine. Moreover, anything presided over by the perpetually thirsty Paul Staines has no room to talk about anyone else becoming “well lubricated”.

So it’s over the rail and into the ocean behind Mr Wint and Mr Kidd for the Fawkes folks this time. Another fine mess, once again.