Following on the news that the settlement between News International (NI) and the twinkle-toed yet domestically combative Rebekah Brooks is almost £11 million came the “resignation” of Times editor James Harding, not of course that Rupert Murdoch engineered the departure to take attention away from his empire’s largesse towards his former favourite. Perish the thought! 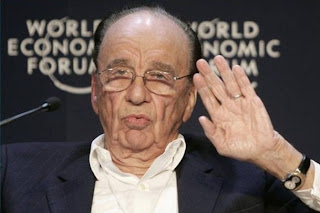 Rupe’s editors down the years have known that their proprietor will not hesitate to sack editors he does not deem sufficiently effective, loyal, or inculcated with the necessary mindset. Harold Evans, who lasted just the one year at the helm of the Times, failed his master on the last two of those tests, and it seems Harding failed the same tests, but not in the same manner. 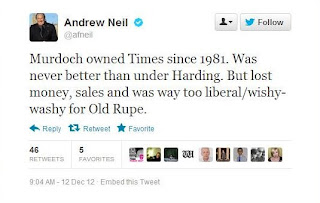 Harding, according to Andrew “Brillo Pad” Neil, whose time in the hot seat at the Sunday Times gives him a particularly intimate insight into such matters, was “way too liberal [and] wishy-washy for old Rupe”. And, as Neil also opines that Murdoch hates Young Dave, that signals a requirement for a replacement who will put the firm stamp of Conservatism (with a capital C) on the paper.

So far, so predictable, but there is another reason for Harding to be given the boot at this time, and that is his informal appointment as the contact with 10 Downing Street over editors’ responses to the Leveson Report. As the deeply subversive Guardian has noted, those talks were “about how to create a body to certify the work of the press regulator that would be set up by royal charter”.

My hunch is that Rupe wasn’t happy with the idea of a royal charter, and that he would see it as yielding ground towards those wanting to see self regulation that is completely independent of editors and owners. On top of that, Harding embarrassed his proprietor with the unnecessary “outing” of blogger NightJack, a case that was only concluded recently (the Times lost).

So Harding’s penalty points finally got him banned. But what is also worryingly familiar about his departure is that the rest of the Fourth Estate appears to be reverting to the culture of Omerta which so typified its reaction to the emerging scandal that was Phonehackgate. Then, it was the Guardian and later the Indy that allowed journalists to report the case. All other papers kept schtum.

Once again it is the Guardian which has both reported Harding’s departure, and given his statement on the matter in full. The sites of the Mail and Telegraph – and thus far also the Indy – have said nothing. But the BBC has reported the story, and many journalists have disseminated the news over Twitter. The old ways do not work. Maybe those old ways also include Murdoch’s approach to this affair.
Posted by Tim Fenton at 18:03