Last winter, I called it the “reverse Express weather curse”: apart from a brief cold spell in the second half of January, it was a mild winter, despite the Express serving up an almost daily diet of apocalyptic weather frighteners, as if the paper was willing a repeat of December 2010 on us. Now, as winter is on us once again, the scare stories are being repeated. 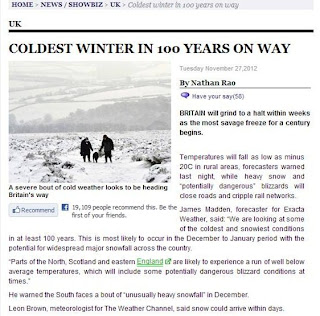 Not so far it isn't

This was signalled back in late November when the Express’ resident weather “expert” (ho ho ho) Nathan Rao proclaimed “Coldest Winter In 100 Years On Way”, which if true would be worse than 1978-9, 1962-3, and 1946-7. Having had first hand experience of two of those, I have to say that whatever its nature, it would have to be pretty severe and extremely cold.

But Rao has been claiming recently that the Express has “a firm reputation for leading the way when it comes to the weather”, which has been comprehensively debunked by the customarily excellent Tabloid Watch – so effectively that Rao has taken to his own blog to whine about being called out. So, what of that “Coldest Winter In 100 Years” he predicted?

Sadly, I have bad news for Nathan Rao: it won’t be happening in the next week. How do I know this? Well, instead of cobbling together scare stories based on the outpourings of fringe forecasters, I’ve been indulging in two things absent from Express weather reports: research and meteorology (the latter being the scientific study of the atmosphere). So what have I found? 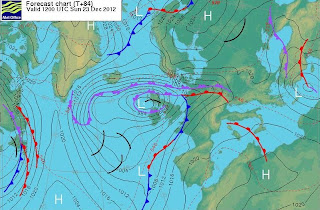 Well, looking at the Met Office website – yes, I know this will have the climate change denial lobby engaging auto-sneer, but it does forecasting better and more consistently than the Express – the synoptic (aka surface pressure) chart for Sunday next shows an area of low pressure over the UK, with much of it experiencing a moist south-westerly airflow.

The associated temperature forecast for that day right now – this from the BBC five day forecast – is 11 degrees Celsius, which is above the seasonal average, not, as the Express would have its readers believe, significantly below it. And the Atlantic Jet Stream forecast (this from metcheck.com) suggests that the weather will continue to be driven by westerly winds for some days after that.

Here is the Jet Stream forecast for Thursday next week, showing the winds in the upper atmosphere coming most emphatically from the west. It would be nice to have the Jet Stream tracking a little further north, but what it won’t be doing on this evidence is going anywhere near that “Coldest Winter In 100 Years” just yet. Thus my introductory tutorial on meteorology for Express dummies.

Not that Nathan Rao will be taking any notice of factual evidence, you understand.
Posted by Tim Fenton at 11:19