In the aftermath of the rabble at the Guido Fawkes blog thinking it would be a really good idea to take the piss out of shadow chancellor “Auguste” Balls because of his stammer, there was a discussion between newly appointed teaboy Alex Wickham and the rather more real-worldly Owen Jones, after the former had claimed that the two were “mates”. Jones protested that he’d only met Wickham briefly. 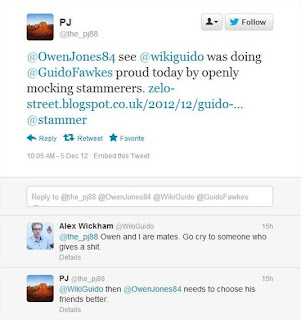 It does seem a stretch for a vapid right-wing spin merchant to enjoy any kind of meeting of minds with someone as forthrightly left-leaning and inclined to adhere to facts, but I can confirm that Jones and Wickham were both at the last Political Scrapbook party, along with the odious flannelled fool Henry Cole, who was pretending to be off-duty, while fishing for any information he could find. 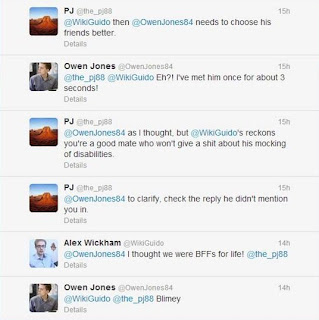 In the course of his attendance, it seems Wickham encountered a lager shandy of significantly greater strength that he is accustomed to, the result being that he had to be given assistance to remain in an upright position. Owen Jones, being a more seasoned practitioner in these matters, suffered no such problem, and being of selfless nature, he briefly gave the necessary assistance. 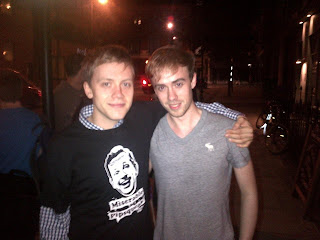 The moment of charity and good humour was captured for posterity, and has found its way – no names, no packdrill – to Zelo Street. Note the slightly apprehensive look on Wickham’s face, possibly at having to be assisted by someone wearing one of Scrapbook’s T-Shirts which bears an unkind (but probably factually accurate) reference to Education Secretary Michael “Oiky” Gove.

Note also that, unlike his Twitter photo which suggests he wears glasses, Wickham appears not to need them, even when Elephants Trunk and Mozart. So don’t be fooled into dismissing the presence of what looks like the Fawkes teaboy just because he isn’t wearing his specs – back to the disguise drawing board for the perpetually thirsty Paul Staines and his pals.

And finally, note that the odious Cole, despite continuing protestations of objectivity, could not bring himself to actually put the Gove T-Shirt on. Once a clueless right-winger, and all that. Another fine mess, once again.
Posted by Tim Fenton at 16:42