While more and more of the UK’s population has no problem with its sexuality, and no problem with sex, for the more righteous part of the Fourth Estate this is still an area where the spirit of Mary Whitehouse moves the hackery, over a decade after her passing. And today both the Mail On Sunday and Sunday Express have worked themselves into a froth of prudery.

By fortunate coincidence, it is the Express that achieves the maximum target hits, as it churns a press release from Mediawatch-UK. For those not familiar with this body, that it used to be called the National Viewers And Listeners’ Association is all they need to know. And that press release not only features sex, but takes aim at the BBC, because, well, they’re broadcasting a programme that discusses it. 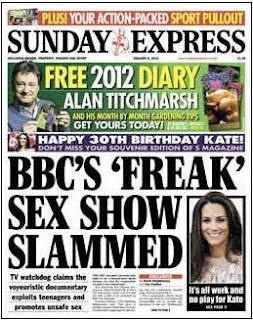 Fits of the vapours: both in the Express ...

So, given the Whitehouse lineage, the headline, “BBC’s ‘Freak’ Sex Show Slammed” is predictable, as is the less than shock horror revelation that the programme concerned “is not educational”. Well, there’s a surprise: yes, a documentary strand item with a studio discussion afterwards that’s going out on BBC3 later this week is not part of the Corporation’s educational output.

Go on, then, which of the usual pundits has pronounced on this? Ann Widdecombe. Ah bless: I know that Widders doesn’t want to talk about this sort of thing, and respect her views, but as even current Tory MP Phillip Davies has said, anyone not wanting to watch – and that would be most of the evening’s viewers – can always change channels or switch the box off. 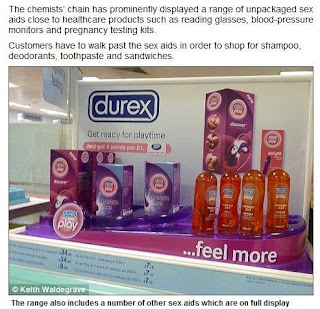 The idea that, as the story asserts, the Beeb is “under pressure ... to axe” the show is complete crap. Mediawatch-UK will complain – they are free so to do – and that will be that. At least it makes a change from the Express’ usual front page diet. But the Mail has a different target in its sights, although it too has secured the forthright opinion of Ann Widdecombe in condemnation.

This time, it’s retailer Boots that has incurred the displeasure of Dacre’s finest, for openly displaying a range of products from Durex, including sex toys. Readers are told that “Customers have to walk past the sex aids in order to shop for shampoo, deodorants, toothpaste and sandwiches”. Oh, the shame of it! But seriously, perhaps the Mail has a point here.

After all, I have to suffer this kind of thing myself: every time I visit my local Aldi, I have to walk past a whole range of undesirable produce as I enter the store. Peanut butter, preserves, cakes, biscuits, chocolates, and other otherwise sugar and calorie laden stuff has to be passed in order to get to the fruit and veg. And it’s all far more detrimental to my wellbeing than consensual sex.

Come on, Mail and Express hacks, get a life.

[UPDATE 1715 hours: predictably, the Mail has cadged the Express story and run parts of it, albeit with acknowledgement, more or less word for word. The sub-headings stress the adverse comment from Ann Widdecombe, and the piece attempts to couple the upcoming BBC3 documentary and the Brand/Ross prank phone call, which of course the Mail On Sunday successfully converted from a minor complaint into a veritable outpouring of righteousness.

The Mail does not include all of the Express original, but has remembered to include the quote from the Church of England spokesman, so that's all right, then]