Hardly had I touched on the modus operandi of the Mail – taking the facts that suit the conclusion, and discarding everything else – than a superb example of the genre has appeared under the by-line of David Rose, whose consistent delivery of freshly steaming bovine by-product on the subject of climate change is without parallel, as is his claim of endorsement by “NASA scientists”.

The headline, “Forget global warming – it’s Cycle 25 we need to worry about (and if NASA scientists are right, the Thames will be freezing over again)”, is a magnificent act of deception: readers will believe that NASA scientists have predicted that the Thames will freeze over some time in the future. They have not. And his assertion that “the rising trend in world temperatures ended in 1997” is bunk. 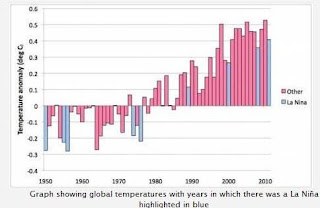 Rose uses a graph of world temperatures from 1997 to 2011 to illustrate his argument, but somehow this differs from the figures in the chart above from the Met Office, which also shows a rather longer data series, as well as showing how the cooling effect of La Niña events has been lessening of late. Rose, though, has an ace to deploy: solar cycles and sunspot activity.

We’ve been here before: in June last year, James “saviour of Western civilisation” Delingpole got himself terribly excited over something he read on the subject of solar activity, though his sources – the GWPF and Anthony Watts’ blog – were being as selective as the Mail. The real laugh-out-loud version came two days later when the clown Littlejohn attributed the news to “the American Astrological Society”.

So it’s not new news, and may well have been put out to coincide with the drop in temperature. In any case, the Met Office has pointed out that any drop in temperature would “be insufficient to offset the dominant effect of greenhouse gases”. So Rose goes in search of someone who will readily dispute this. He finds Henrik Svensmark, who says the sun is important. He would. His research says so.

Undeterred, Rose turns to Nicola Scafetta, while not telling that Scafetta has asserted that much recent warming is down to natural cycles, an analysis that is disputed. So he turns to Judith Curry, and not for the first time. Ms Curry, who has become more sceptical in recent years, is described as “one of America’s most eminent climate experts”. She isn’t, although she works in that field.

Moreover, the last time Rose quoted Ms Curry he misrepresented what she had told him. But not to worry: he’s secured a quote from Benny Peiser of the GWPF, a man with precisely zero peer reviewed papers to his name. Peiser tells Rose what he wants to hear. Rose is clearly happier for hearing this. The demands of the Mail editorial line have been met.

So that’s all right, then.

At the risk of defending Benny Peiser and being a smarty pants, I feel I should point out I know of at least one paper to his name (though not climate). Published in Energy and Environment, he disses the work of Jared Diamond, reason enough to reccomend Prof Diamond's excellent work imho.