By the happiest of coincidences, Express hack Nathan Rao has made a miraculous discovery which satisfies the paper’s requirement for cheap front page stories that frighten the readers. And that discovery is that the weather is colder today than it has been for much of January. So once more the lead story is given over to Rao and his frightener, and creatively re-told for good measure. 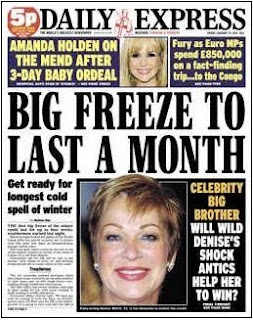 “Big Freeze To Last A Month” screams the headline, although almost immediately this is qualified to “could last for up to four weeks”. And it’s not the first “big freeze” of winter: there was some snow before Christmas, although it didn’t stay for long. One might think that Rao could have checked back to his own story from December 6, which brought predictions of a white Christmas (although it wasn’t).

At least this time there is no intervention from Jonathan Powell and his array of virtual forecasters at Positive Weather Solutions (PWS), the outfit quoted so often by the Express – and also the Mail – after the Guardian’s George Monbiot exposed PWS as a sham and Powell closed it down. So Rao and his fellow hacks at the Express have had to return to the hated Met Office for information.

But their forecasters are not as certain as Rao would no doubt like, managing only to tell that “Cold weather is most likely to dominate into next week”. That’s less than a month. So the Express has also quoted The Weather Outlook, but they haven’t come up with a suitably apocalyptic prediction either. So Rao has to make it up, saying “Last year Britain ground to a halt”.

The very cold weather last winter was in December 2010. It’s now 2012. So, whether or not “Britain ground to a halt”, it didn’t happen “last year”. Maybe the best bet is to look directly at the Met Office site to see the possibilities for the next few weeks’ weather, rather than take any notice of Dirty Des’ shock horror merchants. And the first impression is that there is no shock horror.

The “Day 3 to 5 Forecast” starts with the warning “Some uncertainty”. The “Day 6 to 15 Forecast” warns “At the beginning of the week, although there is a lot of uncertainty ...”, and the “Day 16 to 30 Forecast” tells that “The forecast for mid-February remains very uncertain”, with the explanation that there is a two out of three chance of a cold spell.

But that’s good enough for the Express to paint its apocalyptic picture and frighten its readership. And we know what that does: folks are more likely to pick the paper from the news stand, and the Desmond empire can continue to profit from cheap hackery.

Which means only one thing: another Benchmark Of Excellence.

[UPDATE1 1700 hours: to its shame, the Mirror has also made this "story" front page news, telling in hushed tones how temperatues may be just three degrees Celsius during the day by the middle of next week. C'mon guys, it's Winter - you remember, it gets cold then.

Even the Telegraph is piling in, with a photo from Killhope in County Durham, which just happens to be high up in the Pennines. Not exactly your average weather location, then.

So of course the Mail has to run the story too, with yet more photos from Durham, and Cumbria. And Ayrshire. And somewhere in Gloucestershire that is high enough above sea level to have a dusting of snow.

Makes a change from Amanda Bloody Platell and the latest trip to the shops by Kim Sodding Kardashian, though. Mustn't grumble]

[UPDATE2 28 January: the Express, apparently bereft of any "miracle cure", "house prices", "scroungers", or "EU says something we just made up" stories, has made the weather its front page lead for a second day. With Nathan Rao again the author, the screaming headline is "Freezing Weather Will Kill".

Readers are given the shock verdict from one forecaster that "It is looking pretty cold", and for good measure Rao repeats yesterdays "Last year Britain ground to a halt" howler. 2010 was not "last year", Nathan. Must try harder]