So there they were, telling Lord Justice Leveson yesterday about making sure their stories were accurate, that all details had been checked, and that they were just trying to present the facts to their readers. Those labouring in the service of Richard “Dirty” Desmond may even have believed what they told the Inquiry. But one story on the Express site today shows otherwise. 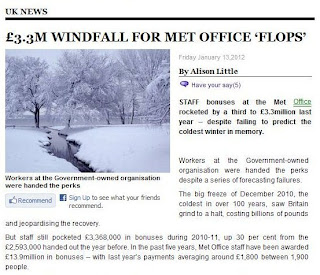 “£3.3M Windfall For Met Office ‘Flops’” thunders the headline, as hack Alison Little goes after the Met Office, a favourite Express target. Performance related bonuses were held to have been “handed” to staff, a term also used by Des’ finest to describe benefit payments and EU contributions. No consideration is given to the possibility that the bonuses were paid in accordance with staff employment contracts.

Readers are then told that the December freeze “saw Britain grind to a halt”, when it did not. Snow and ice caused some disruption, but most roads remained open, trains ran, and airports ultimately worked their way back to normal. And the idea that a bonus of around 5% of salary is comparable to the bonus culture of the City is ridiculous. But what of the Express itself?

As I pointed out last month, the Express began its “Winter freeze shock horror” stories as early as September, splashed an assertion that temperatures would fall to as low as minus 20 Celsius in early October, brought suggestions of a “Big Siberian Freeze” at the beginning of November, and assured readers that “It’s a White Christmas” the week before a Christmas that, er, wasn’t.

Autumn 2011 was the second warmest for 100 years, the December temperatures were above the historic average, and only today are they returning to the kind of values that are usual for this time of the year. The constant barrage of Express weather horror stories has been utterly and completely wrong from beginning to end. Des’ hacks are in no position to call out the Met Office.

And we know why the paper ran these stories. It wasn’t to tell readers about the news in any kind of factual manner, but a cheap and nasty way of filling the front page and frightening folks into buying the paper. That’s what Hugh Whittow knows only too well, but did not tell Leveson yesterday.

Hypocrisy dressed up as news? Another Benchmark Of Excellence.

Oh and front pages from May
BRITAIN TO ROAST FOR A MONTH
SUPER SUMMER TO LAST MONTHS
HOTTEST SUMMER EVER ON THE WAY
Probably my memory at fault here, but I really don't remember the summer being that hot.