Some stories that look too good to be true may be just that. So hacks finding these supposed nuggets might be expected to be even more vigilant, but when it comes to the press empire of Richard “Dirty” Desmond, that thought would be misplaced. Because, such is the hacks’ appetite to bash those dastardly Germans over the Thameslink train deal, an elementary maths howler has been reported as fact.

The story started with a press release by the RMT union (prop. Bob “Scare” Crow), with the less than subtle title “UK taxpayers face £140 million bill to prop up destruction of train building industry”. This asserted that the winning Thameslink bid from Siemens was priced in Euro, and that the currency had depreciated since preferred bidder status was awarded, by 10%. 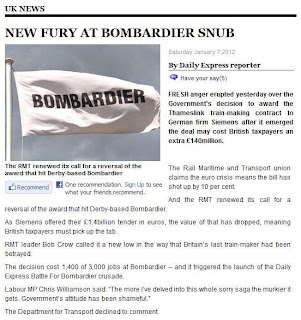 That latter point should immediately have sounded a caution: the Euro has indeed depreciated against Sterling recently, but by less than 6%: someone is exaggerating significantly. But Des’ finest have not been on guard so much as they have been ready and willing to churn without question: the key allegation is that the depreciating Euro makes the contract more expensive. 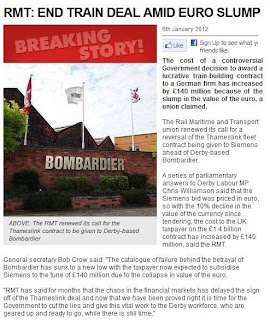 This thought has not been allowed to enter, either at the Daily Express or Daily Star, with the respective headlines of “New Fury At Bombardier Snub” and “RMT: End Train Deal Amid Euro Slump”. The Express piece also told how “Fresh anger erupted yesterday”, although if there was any anger, it should have been directed at the hacks who didn’t bother to engage brain before churning.

The reality is that the Thameslink deal should, given a 6% fall in the value of the Euro, come in at a price around £80 million less than the £1.4 billion bid that won preferred bidder status for Siemens. Given that Bombardier wanted more than £10,000 extra per vehicle, that merely makes their position look worse.

Total lack of fact checking and printing anything your hacks can find to churn? That’ll be another Benchmark Of Excellence.

[UPDATE 21 January: the Derby Telegraph has now reported that local MP Chris Williamson has tabled a number of Parliamentary questions about the Thameslink order being denominated in Euros. The article does not connect him with the RMT's press release, but mentions it.

The question he put to minister Theresa Villiers last Wednesday, talking of the potential risks of exchange rate fluctuations, suggests that he, too, may not have done his sums before entering the fray. Hopefully, he will clarify this at the earliest opportunity]

This has to be one of my favourite stories ever. Thanks for sharing and keep up all the goodwork!