All Aboard The Jibberish Express

All those sub-editors who were sent down the road as Richard “Dirty” Desmond drove down costs at the Express would have known that quality would also suffer. Today that knowledge can be shared by all, following a hilarious mangling of ranting pundit Leo McKinstry’s latest outburst.

McKinstry is riffing on the same theme as Melanie “not just Barking but halfway to Upminster” Phillips at the Mail, but the advantage enjoyed by Mel is that those labouring in the service of the legendarily foul mouthed Paul Dacre have the benefit of sub-editors and speedy corrections to on-line howlers.

Not so the Express, where poor Leo has been reduced to sounding rather like “Professor” Stanley Unwin. Here’s the offending passage of text: 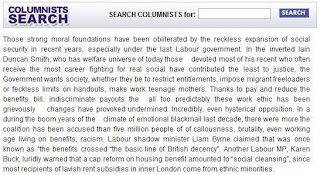 “In the inverted Iain Duncan Smith, who has welfare universe of today those devoted most of his recent who often receive the most career fighting for real social have contributed the least to justice, the Government wants society, whether they be to restrict entitlements, impose migrant freeloaders or feckless limits on handouts, make work teenage mothers. Thanks to pay and reduce the benefits bill. indiscriminate payouts the all too predictably these work ethic has been grievously changes have provoked undermined. Incredibly, even hysterical opposition. In a during the boom years of the climate of emotional blackmail last decade, there were more the coalition has been accused than five million people of of callousness, brutality, even working age living on benefits, racism. Labour shadow minister Liam Byrne claimed that was once known as “the benefits crossed “the basic line of British decency”.

[UPDATE January 24: Poor Leo McKinstry! The article has not been changed at all since its publication and the mangled copy is still available. Deep folly!]