As soon as I saw today’s Express front page lead, something told me that the assertion – “Army To Run Our Hospitals” – was bunk. And yes, it was bunk. Moreover, it’s not a new story, having been available over the PA wire for almost a day now. But running it is cheap, and does not require any of Dirty Des’ dwindling band of hacks to leave the office. So it’s ideal Express material. 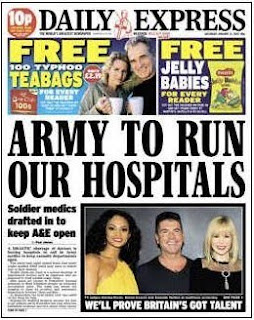 So is the Army going to run hospitals? No. Not even one hospital. But, as so often with the Express, the underlying story contains a nugget of truth, hidden by the freshly steaming mass of bovine by-product. Pontefract hospital in West Yorkshire, which has closed its A&E department at nights following a staff shortage, has considered making a request to the military for cover.

And when readers are told “The move last night raised fears that more under-staffed NHS units may have to follow suit or face closure”, this, plus the following paragraph “Health chiefs say there is a serious shortage of experienced doctors such as registrars who are prepared to work outside major cities”, is pure invention: it wasn’t in the PA original, and doesn’t stand any analysis.

Express hacks may think that Pontefract is somewhere out in the sticks, but the town is a short drive or train journey from Leeds (that’ll be a “major city”, then). It’s not far from York. And Doncaster. And Sheffield. At a pinch, you could commute from Manchester (another “major city”). West Yorkshire is a “metropolitan county”, which means a lot of people live there.

In any case, the Army has not received any request from Pontefract hospital. So in this case, not only is the Army not going to run a hospital, it may not even be involved at all. But the Express also mentions Stafford hospital, which “became the first to get military aid in November last year when two battlefield surgeons and four senior Army nurses were drafted in by the Ministry of Defence”.

Really? The Wolverhampton (yes, Stafford is also not far from “major cities”) Express and Star didn’t mention those four nurses, but did tell of “two emergency consultants normally treating injured soldiers” who would be taking on shifts in A&E. Here, too, the Army would not be running the hospital. And this news has been freely available since last October.

So what we have here is a story off the PA wire, desperately embellished with a smattering of pure invention, with three-month old news reheated and thrown in, topped off with a totally fictitious headline.

And what does that mean? Yes, another Benchmark Of Excellence.