“Another reason to get out NOW” thunders the sub-heading on today’s front page of the increasingly cheap and nasty Daily Express. Yes, the supposedly flagship title of Richard “Dirty” Desmond’s empire is back on its beloved hobbyhorse of EU bashing, alleging a “Franco-German plot”, “unrelenting demands for a referendum”, and the inevitable triggering of “fury”, although on this occasion it did not occur “last night”. 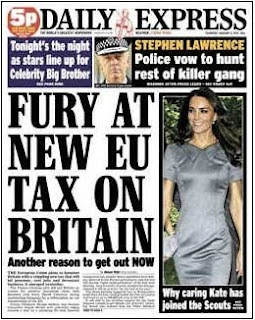 So what is behind this “Fury At New EU Tax On Britain”? For starters, Express political editor Macer Hall makes the usual false assumption that the EU is some kind of monolithic body that imposes things on the UK, although it is not. So the suggested Financial Transaction Tax (FTT, sometimes called “Tobin Tax”) is not part of a “plot”, and neither will there be any “punishing clash” over it.

There is a hint of the reality that the Express would rather its readers do not learn about in a statement they attribute to a “senior source” close to Young Dave: “They cannot impose it on us”. An FTT would require unanimity in order to be implemented, so one EU member state saying no would stop it. The UK would say no, and, it seems, so would Sweden. Game over.

So when the Express says “The EU plans to hammer Britain with a crippling new tax”, this is hyperbolic nonsense. But it does enable Hall to roll out his paper’s “crusade” to cause the UK to exit the EU. Sadly, the numbers used on potential job losses to scare readers do not stand up to scrutiny: the piece claims that an FTT would “lead to up to 500,000 job cuts in the UK”.

Fortunately, FullFact has already pored over this area, as the Telegraph went into similar scare mode last November, the hack concerned being Bruno Waterfield, who Zelo Street regulars will recognise as being of dubious veracity. His claim was that an FTT would lose almost a million jobs, but this would be across the whole of the EU, not just the UK.

FullFact crunched the various numbers, and estimated that an FTT could cause a reduction of between 454,000 and 470,000 in the number of jobs across the wider EU. As the UK has a population of around 10% of that in the wider EU, that would make less than 50,000. If the UK’s pre-eminent position in financial services were given a 100% weighting, that would make 100,000.

This makes the Express shock horror figure out by just a factor of five. Moreover, any money raised by an FTT would not just disappear: if it were ploughed back into (for instance) infrastructure and other capital projects, that would create more jobs and drive economic growth. But the Express does not allow this to detain the readers, as they are there to be frightened into buying tomorrow’s copy.

Thus another Benchmark Of Excellence.

Only out by a factor of 5? That surely is well within the benchmark of excellence!