Leveson – Look Over There!

Next week, the Leveson Inquiry gets back up to speed as a number of serving and former hacks from a range of papers appear in person, or submit written evidence. So the eyes of those other parts of the media, as well as many of the public, will once more be on Leveson. Or those eyes could be looking elsewhere if sufficient whataboutery could be generated in the meantime.

Those unsure of the latter tactic should look no further than the obedient hackery of the legendarily foul mouthed Paul Dacre, where a suitably diverting couple of pieces have appeared in the past 24 hours. Both feature Tory MP for Corby Louise Mensch, who sits on the Commons Culture, Media and Sport Committee – yes, the one that quizzed Rupe and Junior – and both are intentionally less than flattering.

The first, and most significant article, also names Labour MP for West Bromwich Tom Watson, who is on the same Parliamentary Committee as Ms Mensch. Here, it is alleged that the two have “fallen out over the issue” of the culpability of Murdoch Junior in the Phonehackgate saga. This is said to be “threatening deadlock”, with the two dubbed “Beauty and the Beast”. 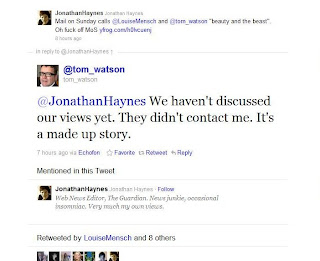 Watson was contacted over the article by the Guardian’s Jonathan Haynes, whose job it is to sift through the web outpourings of those who scrabble around the dunghill that is Grubstreet. Zelo Street deeply sympathises with his plight. The Watson analysis was unequivocal: “We haven’t discussed our views yet. They didn’t contact me [unusual for the Mail]. It’s a made up story”. 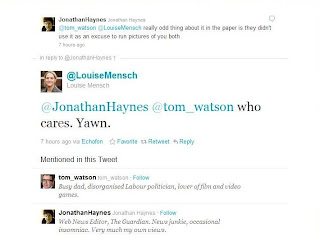 Ms Mensch retweeted that, and in her own reply to Haynes said “who cares. Yawn”, then later Tweeted Watson a Happy Birthday, which does not sound as if the two are in furious disagreement. And the Mail wasn’t finished: another suspiciously planted story just this afternoon places Ms Mensch in a row with “Oiky” Gove’s wife, Sarah Vine, who allegedly said she had a “pure made in Chelsea” body.

So what are Dacre’s finest up to? Ah well. On the menu at the Leveson grill this week are those from the Maily Telegraph – on Tuesday – and then Associated Newspapers (which means the Mail) on Wednesday. To divert attention from one hacking inquiry onto another for the next few days would suit both papers – the Telegraph houses several refugees from Dacreland – rather well.

Hence the fictitious row between Watson and Ms Mensch – both high profile MPs in their own right – with the Mail taking the e-prod to the latter for having the temerity to appear in a GQ feature recently (as any fule kno, women wearing very little are acceptable to Mail Online, but an MP wearing what a GQ stylist supplies for her is to be condemned, especially if any of the garments are made of leather).

Expect more of this low grade interference in the next couple of days.

[UPDATE 9 January: there has indeed been more low grade interference, as Melissa Kite (ex Maily Telegraph) has used her spot at the Mail to sniffily compare Louise Mensch with Margaret Thatcher, the latter being predictably deemed far superior. That Young Dave has been on the front cover of GQ does not seem to occur to her: after all, the idea is to take the attention off Leveson and the upcoming Dacre Day, which is Wednesday]