Brainwashing On The Euro Express

There hasn’t been an Express front page Euro-horror for some time, but this morning Des’ finest put all that behind them with the screaming (and seriously ungrammatical) splash “EU Brainwash [sic] Our Children”. The paper has outdone itself this time: not only is the assertion untrue, but the story, such as it is, has been churned from an earlier edition of ... the Express. 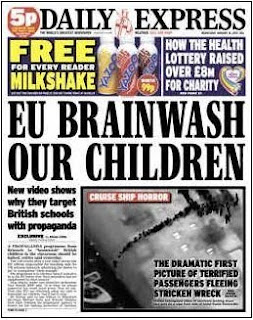 So what’s it all about? Deputy political editor Alison Little is in no doubt: “A propaganda programme from Brussels to ‘brainwash’ British children in the classroom” she blusters. In support of this contention is a UKIP MEP. And another UKIP MEP. And finally, a Tory MEP who has succeeded in remembering the key Express password, “Eurocrats”.

But the “propaganda” doesn’t seem all that threatening, as the Express’ previous attempt to frighten readers with this particular Euro-bogeyman showed. A conference of 50 teachers – which took place somewhere in Staffordshire last November – under the EU Comenius Programme committed the heinous sin of handing out “Brightly coloured pencil cases”. So it’s a serious business, then.

Or maybe not, as the Programme is about greater literacy, language learning, life skills, and understanding other cultures and values. That is, more or less, what papers like the Express have been banging on about for years when running why-oh-why stories about young people. But because there is an EU dimension, this is suddenly denounced as “propaganda”.

So what’s the problem? “Schools are required by the national curriculum – currently under review [nice example of slipping in a threat under the radar there] – to encourage talks of European aspects ... including ... geography” tells Little. Like knowing that there is a thing called the European mainland, that has lots of different countries and people? As Ben Elton once said, “bit controversial”.

And getting children to understand that there are languages other than English? That’s seriously bad. Those dastardly foreigners will be suggesting next that children actually understand about other countries and – whisper it quietly – make friends with other children who aren’t British. And, seriously, this is what frightens the Express, and those UKIP MEPs.

Because youngsters that become educated and informed about the EU are more likely to see through all the Europhobic ranting and scare stories. They will see people in other member states not as dastardly foreigners who are saying bad things about them in another language, but as other human beings. The agenda of papers like the Express and Mail is to stop that happening.

Keep the readers ignorant, keep them frightened. Keep them buying those papers.

[UPDATE 20 January: Mark English, Head of Media for the EC Representation in the UK, has written to the Express (again):

"The idea that giving teachers pencil cases and brochures, at their own request [my emphasis], is 'brainwashing' by the EU (Express, 18 January) is nonsense. The notion that a video published on our website for two years is part of some secret conspiracy is absurd. Sadly, there is a great deal of misinformation about the EU in the UK, though we tend to avoid hyperbolic terms like 'brainwashing'. But it does not come from the European Commission"

Equally sadly, the Express takes no notice and carries on with its agenda driven copy, as witness Leo McKinstry's rant yesterday on the same subject]

The paragraph that says:

"In Saturday’s Daily Express we highlighted concern over EU activities in British schools, including the handing out of brightly coloured EU-branded pencil cases."

has really made my day.

well, Tim, Desmond did say he was not interested in what his newspapers said editorially, but only how much money they made.

"Because youngsters that become educated and informed about the EU are more likely to see through all the Europhobic ranting and scare stories. They will see people in other member states not as dastardly foreigners who are saying bad things about them in another language, but as other human beings. "

Actually I was an ignorant eurofanatic until I became educated about the EU. Your rant assumes that dislike of the EU means a person dislikes European peoples or countries; this is an extremely common mistake eurofanatica make. You are correct in some aspects about this story - the commission has released some extremely crude propaganda ("the ice cream wars", and "Captain Euro" series of cartoons which are extremely crude propaganda aimed at children. These border on racist propaganda and demonise people of arab / jewish roots)