Yesterday, at long, long last, and after almost nineteen years, two men were convicted of the racist murder of teenager Stephen Lawrence. And it was only because they were under 18 at the time that Gary Dobson and David Norris went down for a minimum of 15 years and 14 years 3 months respectively. The Met has not ruled out further arrests. 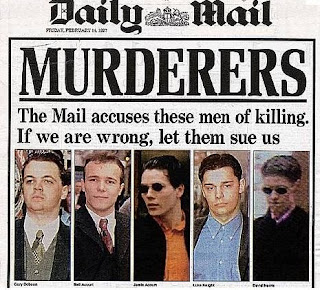 This last has been decidedly shaky ground for the Mail, and to see why, one need look no further than Nick Davies’ Flat Earth News, where he tells “One of those directly involved says that the Mail’s approach to the story began by being hostile. They sent their only black news reporter, Hal Austin, to interview the dead boy’s father, Neville Lawrence, with instructions to run a story attacking the groups who were campaigning for a new inquiry into the murder”. 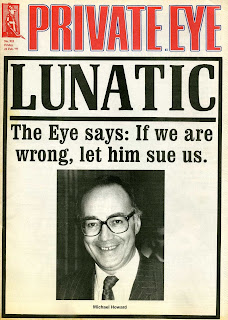 The Eye's take on it

The Mail only changed tack after Neville Lawrence, realising that the paper’s editor was the same bloke he had done some plastering for years earlier, phoned Dacre, who then decided to “do something sympathetic”. This did not fit in with many of his hacks’ attitudes to ethnic minorities, as Davies discovered during his research.

He found a district reporter who would be asked when phoning in a story if the subjects were “of the dusky hue”. Davies tells that the person keenest on this euphemism was a senior news executive. A young man who worked at the Mail for a year said “he had been amazed at the openness of the racism in the office”, although the culprits were “not Dacre, but some of the other older ones”.

And anyone believing that the Mail has somehow turned over a new leaf since Davies did his research four years ago would find that belief misplaced: as recently as August, Melanie “not just Barking but halfway to Upminster” Phillips was raging at “the disaster of multiculturalism”. The following month, Mel was railing against “the Orwellian cause of promoting ‘diversity’”.

The Million Pound hack Richard Littlejohn has wittered endlessly about “diversity”, and is still employed by the Mail despite ranting about there being too many brown faces in a Question Time audience. And only this week, Dick railed against a Bangladeshi man being granted leave to stay in the UK, which he wouldn’t have worried about if (for instance) he had been white and Zimbabwean.

No, the Mail isn’t out of the racism woods yet. Paul Dacre take note.

We shouldnt mock the Mail for doing the right thing for once - even if it was 14 years ago. After all, these things take time, Rome wasnt built in a day!

Everyone know the reactionary and right wing attitude or position of The Daily Mail in matters such as this. Hence the paper did not just suddenly wake up to align itself with the ethnic minority group as shown by its gloating regarding how 'hard' they fought the Stephen Lawrence case.
No one- not least the ethnic minority community is fooled. The Daily mail only took this position simply because the father of one of the boys suspected of killing Stephen Lawrence backed out of the deal to give the Daily mail an exclusive story. The man instead gave his story to a rival newspaper and the Daily Mail immediately responded by printing that 'MURDERERS' headline and its subsequent stance since then. The paper always does this whenever it could find the opportunity to fool the ethnic minorities but we all know that the leopard can never change its spots.