Deception Of The Young TURCs

Less than a week after the so-called Trade Union Reform Campaign (TURC) launched to a less than packed room in the Palace of Westminster, the wheels are starting to come off the wagon: their star guest turns out not to have been intending to endorse their campaign, and just happened to be passing and partial to a free beer. And we now know who really runs the TURC operation.

The TURC Twitter feed proudly announced on the afternoon of January 25 that former Yorkshire and England cricketer Darren Gough “joined us for the launch”. The website even had a photo showing Goughie with his visitor’s pass in mid-beer. But the leering expression on the face of Aidan Burley suggests he is just a little too happy at this particular photo opportunity.

Nevertheless, the flannelled fool Henry Cole showed his approval by re-Tweeting the news. In fact, he managed to pick out the Tweet, add a comment and send it on its way within one minute. And that tells us one thing: Cole is not only the TURC beer monitor, he’s also in charge of the Twitter feed. So, far from being a “Parliamentary Liaison Officer”, he’s running the campaign.

No doubt there will be a suitable riposte from another of those anonymous commenters who are not Cole, yet use his style, to rubbish my analysis. When they don’t get a 100% agreement with their proposition, there will then follow an immediate stream of abuse and accusations, but it will not be Cole doing it. I know this because he has told me so (cue hollow laughter). 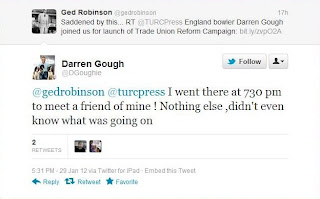 But what of Goughie? As can be seen, he had turned up to meet a friend and “didn’t even know what was going on”. He then emphasised that he was “visiting a friend as it finished”. In the meantime, he had been informed that TURC was using his presence as part of its publicity, and had confirmed that he would be in touch with them. There has (predictably) been no comment from TURC. 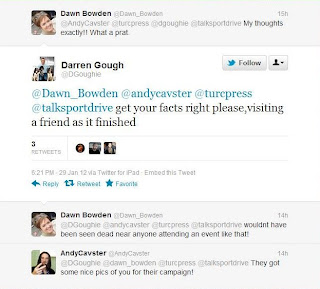 And this should come as no surprise to anyone, given Cole’s track record: TURC’s own photos show around 35 at the meeting, despite all the bluster claiming that there were at one stage 80 or more. There was, as I noted at the time, only one article about the launch published after the event. And now it’s becoming clear that their claim that Darren Gough “joined us for the launch” is sheer deception.

But at least the flannelled fool Henry Cole has let slip just who is running the show. It can’t be a comfortable life to keep opening your mouth and putting your foot in it, but it’s the kind of job that someone has to do. Well volunteered, Hen.

This just indicates the level of delusion they suffer from.

However, I suspect that will not stop them getting a lot of publicity for their campaign/lies.

I note with interest that Harry Cole appears to have the same peculiar obsession with (typically inflated) audience figures as the anonymous sock puppets that usually argue in his favour. (Would it be churlish to add a 'just saying' here?)

"Sheer deception" backed up with photos showing Gough quite clearly "joining" members of TURC at their launch.

In typical trained gopher fashion, Mr Cole has just pulled his age-old tactic out of the bag in response on Twitter:

One of these days he'll learn to respond properly when he's caught out. And, in the interests of past experience, actually answer the question he's put to him and not one he's made up.

And not explaining whether Goughie was actually told what was going on.

Well bugger me with a fish fork.

You don't half draw some special ones here.

The odds on "Aidan's mum" being a Henry Cole sock puppet have reached a point where the book must be closed and no more bets taken.

Give up, Hen. Anyone who is bothered knows it's you. Now run along and invent more of that horseshit that passes from posts at the Fawkes blog.

I think you may need to clarify your definition of "falling apart".

The fact Goughie himself has as good as confirmed it means it's very much still together. So much so that Mr Cole hasn't even been along to defend himself.

Which is bizarre - because he knows the article exists, and he's usually not shy about defending himself against criticism he feels is unjust:

As for Tim Fenton's rantings. As I said to him via email recently:

"As I've said to you before, I have no interest in engaging with your fan site.

On the rare occasion I have been inclined to correct the record, it has been done through a Gmail account."

That is this Gmail a/c.

I have no real interest in what Tim Fenton wishes to write about me, daily, but have yet to see a shred of evidence that these comments are me. Perhaps because Tim well knows - it doesn't exist.

Oh dear Hen, you've just repeated what "Aidan's mum" said, although of course it isn't you - perish the thought!

And not much of a denial on the sock puppeting. In fact, no denial at all on the post itself.

That's yer three strikes. Now run along and see if your perpetually thirsty boss needs the drinksh getting in.

This is why I don't engage, it's like trying to have a conversation with Rain Man's slightly less articulate cousin.

Thank you for confirming you smears to be just that.

Put up or shut up Fenton.

Mardy strop and abuse in one - excellent ranting!

There is nothing to put up, Hen, and you're in no position to cause me to shut up.

All in all, a not inconsiderably crap John Major impression from the flannelled fool Cole. Oh yes.

"Nevertheless, the flannelled fool Henry Cole showed his approval by re-Tweeting the news. In fact, he managed to pick out the Tweet, add a comment and send it on its way within one minute. And that tells us one thing: Cole is not only the TURC beer monitor, he’s also in charge of the Twitter feed."

No, it merely means he knows how to use tweetdeck. The clue's in the screenshot, in case you hadn't noticed.

Mate, this is why people think you're a lunatic - any point you might have is lost beneath your demented and woefully myopic rantings.

Not even the pretence of "Aidan's mum" this time. Or "Standard Reader". Or "TURC Attendee".

Standards are slipping in the world of sock puppeting. But the abuse is as pointless as ever.

How about an apology to Darren Gough from TURC and Harry Cole?

I wont hold my breath.

My favourite bit was when Harry Cole changed the discussion so it was about whether or not he sockpuppeted rather than how he co-opted Darren Gough's appearance at his do to make it look like he was a supporter.