And so the escape from the upcoming Royal Wedding was effected successfully. The start was early, but the flights (two of them) uneventful, barring the customary quickstep through Zürich Airport, a subject to which I’ll return. For the next few days, the Zelo Street blog will be coming live from Milan, mainly a business destination, which is a pity, as it’s ideal city break territory.

So far there is little sign of the Royal Wedding, bar the papers I glanced at en route – for which the Express, bless it, has to take the prize for sheer inanity. There is also little sign of the chaotic traffic that I remember – and not at all fondly – from places like Rome and Naples, probably because getting into Milan and parking are not for the faint hearted, and ferociously expensive.

Folks get around by making use of a – thus far – very good public transport network, although many of the trams, some of which are late 1920s vintage, have high floors. It’s not expensive: one journey costs one Euro, and a day ticket just three Euro. Compare and contrast with London. 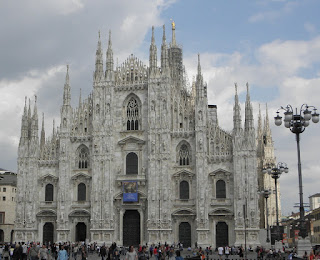 This is the Duomo, the centre of the city, and the third largest church in the world (says the guide book). This part of the city is off limits to cars. Unlike Naples, things like pedestrian lights not only exist, but are obeyed by road traffic. And missing in Milan is the feeling you get in both Naples and Rome that the transport infrastructure would not need much prompting to collapse in short order.