EXCLUSIVE: TPA Sponging Off The Taxpayer

Recently, the so-called Taxpayers’ Alliance (TPA) produced a report entitled “Taxpayer Funded Lobbying And Political Campaigning”, authored by current head non-job holder Matthew Sinclair. This dubiously argued research had one very firm conclusion: such behaviour was A Bad Thing, and the TPA called for a halt to it.

So it was more than a little surprising to find the TPA indulging in a little taxpayer funded campaigning of their own: a Zelo Street follower prompted me earlier to point out that the TPA are at present advertising for an (unpaid) internship.

But, so what? Internships are good for folks wanting to build up experience and a contact base, aren’t they? Well, yes they are, but that isn’t the issue: the TPA have advertised the vacancy on a publicly funded resource. Make that a Taxpayer funded resource. 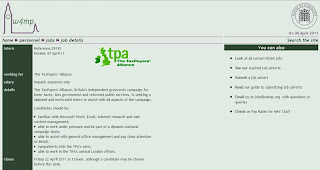 The advert, as can be seen, has been put up on the website w4mp.org, which describes itself as “The site for everyone working for an MP”. Just to emphasise the Parliamentary nature of that site, it also carries the House of Commons insignia. So what does the TPA have to do with MPs?

It gets worse when you look at the “About” part of the site, where visitors are told “This project was established ... with European Union funding”, so that’s the TPA kicking the EU while simultaneously sponging off them.

Moreover, the “About” page also emphasises “The maintenance of the website is now funded directly by the Resources Department of the House of Commons”.

I’m sure Matthew Sinclair and his less than stellar array of non-job holders have a good explanation lined up for their blatant sponging off the people on whose behalf they claim to be campaigning.
Posted by Tim Fenton at 10:21