Yesterday I looked at the descent of the Maily Telegraph from its position as a paper of record to an increasingly vapid broadsheet version of the Daily Mail. But, despite the decline in quality of the reportage, at least the Telegraph got its EU story a day ahead of the Express, which is fast becoming a joke.

Richard Desmond’s supposedly flagship title, which also got the Wakefield housing provider versus electrician story a day late earlier in the week, did not cover the EU Budget request when the news first broke, despite the paper running an anti-European “crusade”. 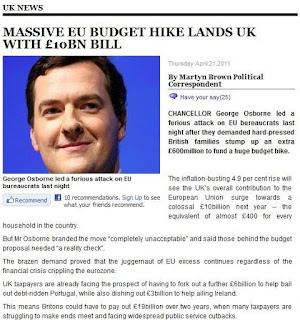 But the story, when it finally arrived, pressed all the necessary buttons: “Massive EU Budget Hike Lands UK With £10BN Bill” screamed the headline, so already the impression is given that any budget increase means another 10 billion for the UK to pay. And the Express takes the biscuit in style when telling of “a furious attack on EU bureaucrats last night”, because by last night everyone else had seen the story and the news cycle had moved on.

Anyone reading the Express piece would conclude that the budget increase had been imposed and that it was a done deal, such is the appalling standard of the product. But the same conclusion would be reached from the Telegraph article as well, which allows the thought to enter that the latter was the source for the former.

In case anyone allows that thought to linger for long, though, Des’ finest have added some unique content via their talking heads: one from Open Europe, one from UKIP, and Bill Cash, who is just about in the Tory party. And they’ve added an “analysis” piece, to try and show how fair and balanced they are. 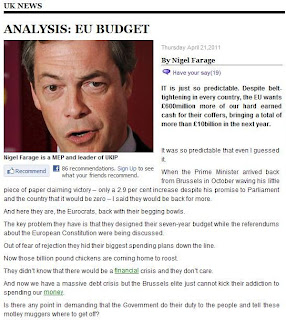 Before anyone gets their hopes up, however, this extra item has been authored by UKIP head man Nigel “Thirsty” Farage. Not exactly an even handed analysis, then, but one that would find favour across the north Altantic with our old friends at Fox News Channel (fair and balanced my arse).

There’s a word for that kind of content: loaded – as in biased, only worse. But there’s a sale in the offing, so there won’t be much more of this drivel. That’ll be another Benchmark of Excellence, then.
Posted by Tim Fenton at 13:57

The Express in my local newsagents the other day had a main story about the cancer risk from EU light bulbs.