Phil Hendren – My Part In His Downfall

And so another player in the right leaning part of the blogosphere has gone into semi-retirement: yesterday, Phil Hendren, who blogs under the alias of Dizzy Thinks, told the world that his energies would henceforth be devoted to a new work opportunity, in the sobering aftermath of an organisational downsizing.

Been there. Welcome to the machine, Phil.

In a no doubt complete coincidence, two days before his announcement, Hendren had experienced a less than favourable outcome on his one and only visit to Zelo Street. After a January post on Phonehackgate was mentioned in a Twitter discussion, he followed Paul Staines (aka Guido Fawkes) in excusing his failure to call the affair correctly in commenting on that post. 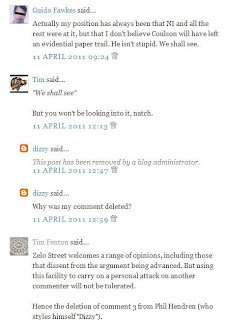 If at first you don't succeed ...
Unfortunately, he also used the occasion to take a swipe at fellow commenter Tim Ireland of Bloggerheads fame. I reacted adversely to this, and deleted his initial comment, because (a) Zelo Street is my blog, (b) I therefore act as sole arbiter of what is acceptable, (c) Hendren’s comment did not find favour with me, and (d) because I say so. 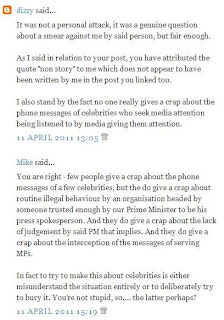 ... try, try again ...
Undeterred, Hendren returned to the fray. This prompted two other commenters to pass adverse comment on his efforts. By this time I was deriving significant enjoyment from the exercise, but sadly, Phil decided to retire from the field of battle and the fun stopped. 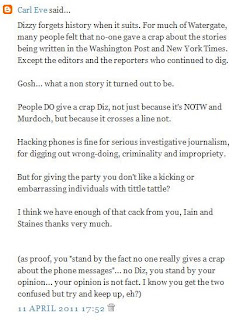 As I said at the outset, Hendren’s decision to prioritise his time differently has most likely been made independently of his less than totally successful visit to Zelo Street, but the coincidence is interesting. Whether folks miss his contribution to the blogosphere may depend on whether they find merit in the reams of whataboutery and Hendren’s habit of repeatedly posting the equivalent of “look over there”.

What is a pity is that there are, over time, less in the right leaning part of the blogosphere who are genuinely independent and thought provoking, like Hendren and Iain Dale, and more of those who churn out low grade bile under the umbrella of papers like the Maily Telegraph. Such is progress.
Posted by Tim Fenton at 13:30

Actually I did return and Blogger had spazfit when I submitted the reply and I couldn't be asked to write it all again.

The long and short of it was a sarcastic swipe at the absurd idea that a blog read by less than 0.1% of the population could have the influence to "bury" a story in comments on a blog read by even less. There was then a little musing on the delusional self-importance of blogs compared to their real world influence. Oh yes, I also rolled my eyes at a Watergate comparison.

Incidentally, what is this about posting "look over there"? Are you falling into that same little trap of thinking what I post has some sort of larger influence on the media agenda? I do hope not because that would just be immensely silly, nay even stupid.

Oh yes, and it's not a coincidence at all. Basically after being taken to task by you, and seeing you call me by my surname with disdain I was utterly distraught. I failed to sleep all night and then decided whilst driving into work on the M1 that in order to hide my shame I would use a new job as cover for my embarrassment at being singled out so comprehensively by someone read by even less people than myself but who has probably as little influence.

Comments that display the retention of a sense of humour are welcome, especially those that bring unintentional hilarity.

[Phil, the title of this post hints at the vanishingly insignificant role that this blog has had on your decision. If you cannot, or will not, take that on board, then that will merely cause yet more unintended hilarity]