The gulf between apparently cheap airfares and the amount you end up paying is something we all know of, and complain about, but usually accept. But the plainly larcenous behaviour of some airlines in levying credit and debit card charges has now caused the folks at Which? to cry foul. And in their sights is Ryanair, the Millwall of air carriers (everybody hates us and we don’t care).

Which? makes the not unreasonable observation that a debit card transaction costs the seller around 20 pence, an amount that should be possible to absorb as part of that transaction. But carriers like Ryanair charge an additional £5 per passenger per sector for these cards, so for that “family of four” on a return trip they rake in £40, rather than 20p, a mark-up of 200 times the cost.

So Which? has made what is called a “super complaint” about this practice, which it asserts is making it difficult for consumers to make informed price comparisons, and therefore interfering in the working of this particular market. Moreover, they point out that alternatives not attracting the extra cost, such as prepaid cards, also entail an additional charge.

But what has irked Ryanair is the call for the practice to be declared illegal. So, hardly had the “super complaint” been submitted than the carrier was out of its corner with fists flying: “Ryanair does not impose any debit or credit card fee” thundered the press release. The charge, it was explained, is a “discretionary admin fee”. 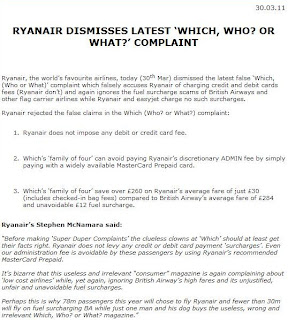 Perhaps the carrier’s spokesman typed it with his feet – he certainly shows every sign of putting at least one of them in his mouth.

[The Ryanair press release has been included as some readers may not have otherwise appreciated the spokesman’s ranting]
Posted by Tim Fenton at 17:56