Mail – Royally Full Of You Know What

With just five days to go before the wedding of Prince William of Wales to the future Princess Catherine of Berkshire, the monarchist part of the Fourth Estate has been winding itself up into an expectant froth. And no paper is more monarchist than the Mail, with royal stories coming thick and fast.

Problem is, the stuff is coming so fast that quality control is slipping, with an early casualty being credibility. Hack Katie Nicholl – the cause of an outpouring of refreshing candour from Lily Allen recently – has suggested that the Duchess of Cornwall went through the guest list with a red pen, and removed Annabel Goldsmith’s name, along with several others. This is pure invention.

Having allied herself with the Goldsmiths – the trashier end of the nouveau riche – Nicholl pauses to scold Clarence House for mis-spelling “Eton”, before tackling the guest list, and protocol. “Organisers were faced with a delicate problem when it came to styling certain dignitaries and their spouses” she tells us, making a big deal of SamCam being styled “Mrs David Cameron”, contrasting this with Nick Clegg’s wife being styled “Ms Miriam González Durántez”. 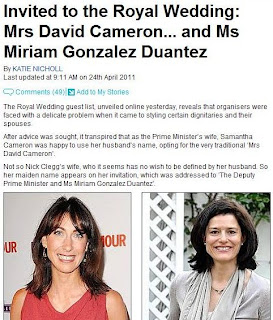 “Nick Clegg’s wife ... it seems has no wish to be defined by her husband” sneers Nicholl, showing her crashing ignorance of Spanish nomenclature, as well as spelling Durántez incorrectly, for which she will, no doubt, rightly scold herself. The rest of the piece contains a cheap and nasty jibe at Elton John and David Furnish which is beneath contempt.

Fortunately, help is at hand with churning out the relentless succession of royal copy, so Nicholl can take a breather as “Daily Mail Reporter” reveals that beer will not be served at the wedding reception, to which I say Big Expletive Deleteding Deal. And the quality is no better, with Westminster Abbey’s North and South Lanterns getting mixed up. 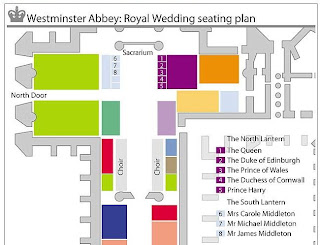 But the author does at least try and bring a little decorum to the piece, telling that “It is well-known that Miss Middleton has never particularly enjoyed drinking – preferring to sip one small glass of wine”. Strange, that – I thought she had been described as being able to “drink Prince William under the table”.

Who might have made that assertion? Why, someone called Katie Nicholl, of course, “longtime royal watcher” and, er, someone who writes for the Mail. Like, for instance, most of the guff cited above.

The Daily Mail and Mail On Sunday: they’re full of crap, and so are their hacks.
Posted by Tim Fenton at 15:54