So. It’s The Big Day. What special things was everyone doing today? Full admission: even though I’ve deliberately left the country for the duration, I’ve checked out popular tourist locations in central Milan to see if Royal Wedding fever has travelled to the land of, shall we say, controversial Prime Ministers. 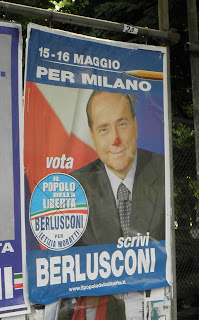 Not Red Nose Day in Milan

There’s local competition, as well, as there is yet another election campaign in progress. Although the poll appears to be a purely Milanese one, the inevitable presence of “Duce” Berlusconi is all over the posters, as is the graffiti that defaces them. This example is typical.

Mid morning, with a sprinkling of rain in progress, a look round the area in front of the Duomo showed no Royal Wedding fever at all. Nor was there any trace of the upcoming celebration in the Galleria Emanuele II. In fact, I couldn’t find anywhere broadcasting from the UK.

The only signs have been after the event: the likening of the bride’s dress to that worn by Grace Kelly when she too became royalty, and a family group boarding a tram holding little Union Flags on sticks. No doubt there will be afters, but workers and sightseers appear to have carried on as usual here in Milan.

And the rain has stopped, the cloud lifted, with the result that we have a warm and sunny afternoon in progress. Ciao!
Posted by Tim Fenton at 15:23