Oh Brother – What A Star!

The increasingly shameless plugging of one part of Richard Desmond’s empire by another has been taken up several notches by the Daily Star Sunday today, the occasion being the supposedly imminent signing of an agreement to bring the Big Brother franchise to Channel 5.

So the paper’s front cover, with its headline “Summer Of Bruv” (along with a cheap attempt to garner readers from the newly defunct Sunday Sport) is no surprise. What may cause a few raised eyebrows is the follow-up “Celeb Big Brother line-up REVEALED”, especially given that it is not. 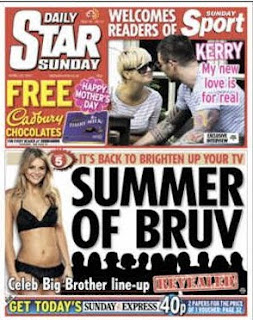 Under the “exclusive” by-line of Susan Hill, all that Star readers get is a sack full of speculation over who may (or may not) appear in a summer edition of the show. At first it all looks like a done deal, as readers are told “Channel 5 bosses [have] lined up the hottest ever hit list of 12 celebs for the all-star version of the show”.

So that’s a definite, then? Well, no it isn’t: we are then told that the deeply unsavoury Mohamed “you can call me Al” Fayed is “top of the wanted list”. So the old Fugger hasn’t been signed up, and unless he really is desperate for the cash, he won’t be doing so.

Likewise Charlie Sheen, who is supposedly going to be the subject of a “big-money offer” (“big-money”? Richard Desmond? Yeah, right). Other names who can do without the attention of Dirty Des’ forthcoming new acquisition are football pundit Andy Gray, the evergreen Joanna Lumley, occasional royal love interest Chelsy Davy, boxer Ricky Hatton, and rapper Tinie Tempah.

Which leaves a mix of z-listers from the world of formula pop, reality TV, Aussie soap, and those like Peaches Geldof, who is famous for being herself personally now. Who knows, if Channel 5 can provide a big enough pile of Snow, they might even get Tara Palmer-Tomkinson off the streets for a few weeks.

A list of Slebs lower than Z? That’ll be another Benchmark Of Excellence.
Posted by Tim Fenton at 10:28