Express – For Whom The Road Tolls

How the Fourth Estate gets hold of stories – or, in far too many cases, makes them up – can make for fascinating investigation. There is usually a factual nugget at the heart of even the biggest pile of bullpucky, though in the case of the Daily Express’ latest Euro-frightener, you have to get very dirty to find it.

Yesterday, there was a vote in the transport committee of the European Parliament (EP) on a directive that would enable [note that word] member states to set up charging mechanisms for the external costs of commercial traffic – such as noise and pollution. Hauliers saw this as a potential additional tax, so naturally have argued that it could increase the cost of goods to the consumer.

Thus the factual nugget. Like most proceedings from the EP, it’s not especially dramatic, and not frightening. So the Desmond press needs to get its turd polisher out before the readers get a chance to see the story. And first fact to be jettisoned is the “potential” of any extra charge, so we get the title “EU Tolls Soar For Truckers”. 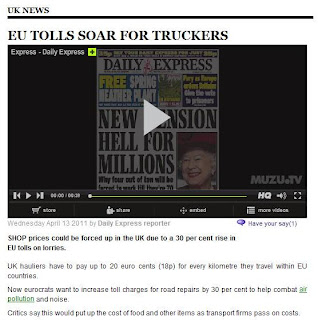 And if there are soaring tolls, there has to be a suitably frightening amount by which they are soaring. But there isn’t any definite amount, as there isn’t even a directive yet, so the Express makes one up: it’s “a 30 per cent rise in EU tolls on lorries”.

But 30 per cent of what? No need to worry, the Express has that one covered. It tells how “UK hauliers have to pay up to 20 euro cents for every kilometre they travel within EU countries”, suggesting that those dastardly foreigners get away without paying, and hoping its dwindling readership doesn’t realise that “up to” may mean “zero”.

And who is doing the deed? Yes, it’s those “eurocrats” again, wanting to “increase toll charges for road repairs by 30 per cent to help combat air pollution [avoid that link – it’s another advert] and noise”. There is a little extra factual nugget behind the assertion: much of the debate in the EP was about how toll revenue should be re-invested, and at least the Express got the noise and pollution angle.

So there, from the least promising factual background, is how the Express inflates a story into a classic Euro-frightener. Excuse me while I go for a shower down.
Posted by Tim Fenton at 14:22