The Daily and Sunday Express are losing readers: this is not new news, and the decline has been going on for decades, ever since the late 1940s when the Daily Express peaked at a daily circulation of around four million. What is also happening is that other titles in Richard Desmond’s stable are losing readers even faster. 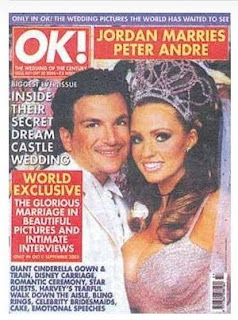 But there is always the banker that is sleb goss repository OK! Magazine to fall back on, isn’t there? Well, maybe not, as that title outdid the decline in the women’s magazine sector during the second half of last year. The average fall in that sector of 8.4% was small beer compared to a whopping 23.4% for OK!

By comparison, rival Hello! Magazine saw its circulation dip a mere 0.8%. So Des’ goss flagship is no longer selling half as much again as its rival, but just 10% more. Much more of a decline and Hello! will be in front. Small wonder that Des and his pals are using Channel 5, the mag, and the papers to plug one another.

Sinking figures and tired news all round? That’ll be another Benchmark Of Excellence.
Posted by Tim Fenton at 16:01