In 1993, a kerosene tanker veered off the M56 motorway at the point where the road crossed over the West Coast Main Line (WCML), ending up on the railway tracks. There was an intense fire. Fortunately there were no trains in the vicinity, and the tanker bringing down the overhead wires tripped circuit breakers, which reverted all nearby signals to danger.

Eight years later across on the East Coast Main Line (ECML), another instance of a road vehicle involving the railway in its accident had less fortunate consequences. Gary Hart, from Strubby in Lincolnshire, was at the wheel of his Land Rover, heading west along the M62 with a loaded trailer. It was just after 0600 hours, and Hart had not slept the previous night.

Hart has always denied falling asleep at the wheel, but it is not easy to otherwise explain why his Land Rover went off the carriageway, down an embankment, and onto the ECML, coming to rest fouling the southbound track. Soon afterwards, as Hart was talking to the emergency operator, the 0445 Newcastle to London train, travelling at around the line speed of 125mph, struck the Land Rover.

The leading vehicle of the train was derailed, and ultimately it collided with a northbound freight train. Six passengers and four servants of the railway lost their lives. Hart was convicted on ten counts of causing death by dangerous driving and was sentenced to five years in jail. 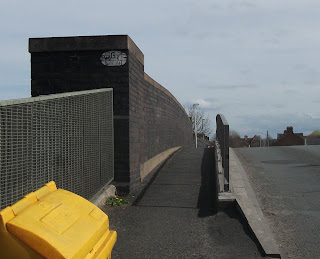 A little extra protection - for the railway

In the years since this collision, measures have been taken to try and reduce the possibility of more road users involving the railway in their accidents. Although the barrier at the point where the M62 crossed the ECML extended for 47 metres beyond the overbridge, this was lengthened further. The practice was extended to other motorways and trunk routes. The DfT’s approach has been well documented.

Most recently, measures to protect rail routes have come to second string “A” roads and even local routes subject to 30mph speed limits. This photo shows a recent installation of barriers between carriageway and pavement at Bridge 6, north of Crewe, where the B5076 crosses the WCML. The barriers give sufficient protection to the bridge parapets to stop their dislocation by a vehicle impact – which could cause a potentially deadly fall onto the railway below.

Further north, where the A530 crosses the railway at Minshull Vernon, the barriers are yet more substantial, and extend well beyond the bridge parapets, but then, the road here is subject only to the national speed limit of 60mph. Such measures won’t stop the next Gary Hart setting out on a 140 mile drive without a good night’s sleep, but they may help the railway continue its recent excellent safety record.

That’s just one passenger fatality in the last six years.
Posted by Tim Fenton at 17:32