Today has been spent out of town, with a journey to the lake side at Como, just under 30 miles out of Milan. Switzerland is visible in the distance, especially if you ride the funicular to Brunate, which is high enough up to be noticeably cooler than down by the lake. The train fare from Milan to Como is just over four Euro each way.

Funiculars are just as common over in Switzerland, and in Austria, as in Italy, though the latter country is the one that folks tend to think of first. After all, Naples has four of them, all very much part of the local public transport system, and not tourist oriented at all. 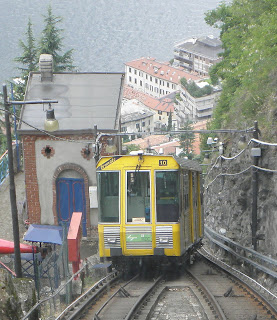 Although the Como to Brunate funicular derives much of its loading from tourism, it too is used by many locals: it’s commonplace to see people returning home with their shopping mingling with sightseers.

And how steep is it? The photo gives some perspective at the top of shot, with the lake and waterside housing clearly visible, as well as the building to the left of the ascending car.
Posted by Tim Fenton at 17:09