There are rail enthusiasts. And then there are serious rail enthusiasts. How serious? Serious enough to pay as much as £2,842 each to spend nine consecutive days on a steam hauled train – with nights spent at hotels en route – as it journeys from London to the north of Scotland to the south west and then back to the capital.

My enthusiasm for rail and steam doesn’t go nearly that far, but the Railway Touring Company is now on its fourth Great Britain tour, catering to enthusiasts from mainland Europe and north America, as well as the UK. This endeavour stopped off in Crewe yesterday, having already visited Edinburgh, Inverness, Wick, Kyle Of Lochalsh, and Glasgow, with Bristol and Penzance to come. 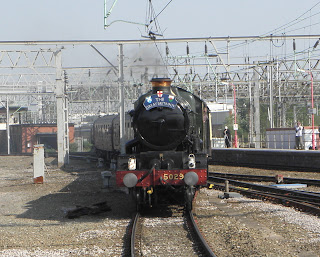 If it's Friday, it must be Crewe
Taking part in this kind of tour requires real commitment – and plenty of spare time. The first day’s travel, from London to Edinburgh, uses up well over eleven hours, around seven hours slower than the fastest service trains, and five hours slower than the pre-war “Coronation” flyer. Why so slow? Well, the railway is no longer geared up to service steam traction, so the frequent water stops eat into the journey time. And progress is limited to 75mph. 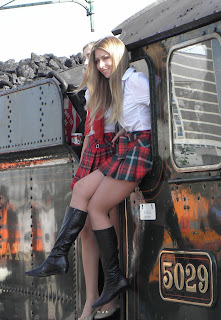 Mail Online? Pah! Amateurs!!
But there are benefits from taking things a little more steadily than usual. Stopping off en route allows punters to take a stroll, check out whichever of the nine chosen locomotives is at the head of the train, and exercise the camera. Yesterday’s stop at Crewe added an unsubtle but undoubtedly popular hostess photo opportunity. It’s probable that the presence of the legendary Ray Poole at the regulator went unnoticed at the time. 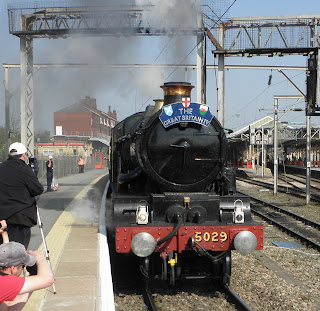 Departure: just two and a half days to go

And then a few blasts of the whistle summoned those dedicated punters back on board, and it was time to depart, for Shrewsbury, Hereford, the Severn Tunnel, and Bristol. Today the Great Britain IV takes its passengers to Penzance, before returning to London tomorrow.

Also, maybe those who shell out for this kind of experience aren’t as daft as all that: many more will willingly spend far longer on board cruise ships, without the reward of the scenery, and knowing that it’s hardly a once in a lifetime experience.
Posted by Tim Fenton at 11:31