Cripes Chaps, A Bike Scheme With No Bank!

Back in November last year, I observed that, unlike the London cycle scheme, which for reasons best known to Bozza and pals had to have the name of Barclays Bank plastered all over it, the one in Barcelona managed with just the sign of the local authority.

However, a “sample of one” can be unrepresentative, so I made a mental note to check out any further schemes I encountered on future visits. And I have to report that there is a cycle hire operation in Milan, and that it too manages without the use of a major partner or sponsor. 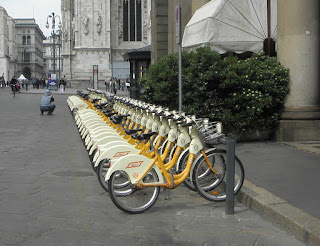 This scheme is called BikeMi (website HERE, in English), and this well populated cycle station is situated just behind the east end of the Duomo. The bikes don’t look all that different to their London cousins, except that they bear the scheme name and logo of the Comune di Milano (and that’s that).

All this and a day ticket for public transport priced at just 3 Euro. These dastardly foreigners might be trying to tell us something. Yikes readers!
Posted by Tim Fenton at 16:35