Express – Not Quite Plagiarism (One More Time)

Three days in a row it has been disturbingly easy to find a piece run by the Express that has previously been published elsewhere (Monday’s HERE and Tuesday’s HERE): today’s comes from the paper’s Night And Day section, and like the article on snow across the USA, had appeared previously on the Huffington Post.

The HuffPo not only does the serious news, but also serves up lots of slebs, which I reckon was the inspiration for the Daily Mail’s website (both, for instance, dwell at length on the appearances of the Kardashian sisters). And the Express also likes to plaster the Z-listers all over its site. 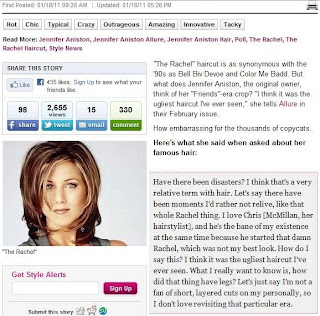 Huffington Post, 18 January
Subject of the original HuffPo article was evergreen former Friends star Jennifer Aniston, and the “story” was that she hated the iconic hairstyle her character wore. This piece was originally published at just before 0930 ET yesterday, or 1430 UK time. The Express feature carries today’s date, which is more than enough time (at least fourteen and a half hours) to lift the copy and rewrite it. 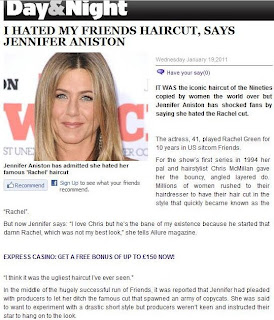 Also telling is that, although both HuffPo and Express mention that the source for the story was Stateside fashion magazine Allure, only the HuffPo piece includes a link to the Allure site. Which gives the impression that the Desmond press are doubling down on their economy drive.

But there is at least some method in the apparent madness: providing the top stories in the Express – or any other paper – are part of the current news cycle, readers are less likely to notice that other content is yesterday’s. Especially if those readers don’t follow news sources Stateside.