Just in case anyone didn’t know, the barrage of advertising across the Media section of the Huffington Post underscores this week’s supposedly big event: Piers Morgan Tonight, fronted by Piers “Morgan” Moron (famous for being himself, making a laughing stock of the Daily Mirror, and getting decked by Jeremy Clarkson), makes its 9pm ET debut on CNN.

Already, we know that The Percy Moron Show will feature Oprah as first guest, and that, unlike the Larry King programme that it replaces, it will not be live. We also know that other first week guests include Condi Rice, but she already did the Daily Show a while back, and is likely to be still promoting her book. And the interview has to fill most of a one hour show.

What the folks at CNN will know only too well is that not only did Larry King drop over 40% of viewers during his last year, but that for the second year running, they were third in the primetime cable news stakes behind MSNBC, and of course our old friends at Fox News Channel (fair and balanced my arse). For African American and Hispanic viewers, MSNBC were top, ahead of Fox, in 2010, which should surprise no-one. 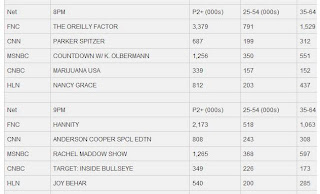 The scale of the challenge for CNN

Moreover, the nature of this particular beast means that accurate ratings for the cable news channels are readily available, so the scale of the challenge for The Percy Moron Show can be shown. These are the figures for the 8pm and 9pm ET hours last Thursday: see how CNN are third at 9pm and fourth at 8 – behind even sister channel HLN. And it should be noted that Anderson Cooper, who was standing in on the 9pm slot, is a popular and respected presenter.

As I’ve previously observed, Sean Hannity and Rachel Maddow are not reported to be quaking in their boots. “Lights ... Camera ... Piers” for how long? Rupe himself doesn’t seem too optimistic: Murdoch turned down any suggestion of an interview on The Percy Moron Show, telling his former employee “I wish you good luck, but I do not wish you success”.