In the pantheon of those who dedicate much of their waking hours to rubbishing the idea of man-made climate change, the presence of Steven Goddard is key. He contributes guest posts to Anthony Watts’ blog (note that he asserts Portugal to be “tropical”), his Real Science blog is cited by the Maily Telegraph’s chief denialist Christopher Booker, and sneermeister James Delingpole also gives him the nod of approval.

Clearly, much investment has been made in Goddard’s credibility. And that investment appears to have been misplaced, because Goddard is not as knowledgeable as his grandly titled blog Real Science suggests. The evidence for my assertion is easily found, and is easy to explain: it is from Goddard’s own blog, and two posts made in December last year. 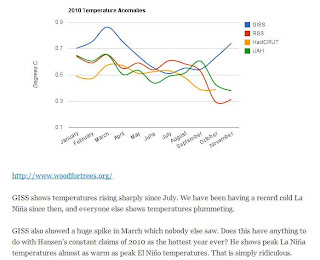 Ridiculously simple error
On December 11, he uses a graph titled “2010 Temperature Anomalies”, but then talks in terms of temperatures – not temperature anomalies. So when he describes “temperatures plummeting”, he is totally wrong: all the readings shown are showing anomalies, and positive ones at that. This means that every line on that graph shows that temperatures are higher than for the long term average – the only divergence between them is over the amount of the anomaly. 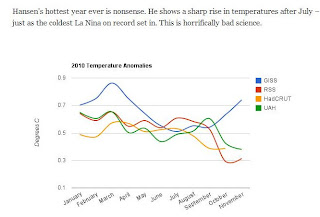 This is not a one-off error: on December 13, Goddard uses the same graph, and makes the same mistake. The rest of his ramblings – over El Niño and La Niña – is irrelevant, and one can only assume it is included in order to make its author sound authoritative. He has also been caught out making this mistake by Ben Lawson, so that’s Goddard’s three strikes, then.

Ironically, the accusation of inability to read data correctly is one that Goddard is more than ready to hurl at others, along with a routine helping of abuse. Perhaps if he read up on a little of that “real science”, he would be credible. Right now, he is not, and neither are those who are buying into his analysis.
Posted by Tim Fenton at 17:59