There are no areas of the economy off limits to the so-called Taxpayers’ Alliance (TPA), and such is their zeal for misinformation that they have spun off yet another Astroturf group, the so-called Drivers’ Alliance (DA), to help spread their particular brand of propaganda on matters relating to road transport and travel.

The agenda of this new group is shown in its full glory in a so-called “research note” titled “Speeding Fines” [.pdf]. Here, the usual TPA methodology is used: overwhelming numbers of Freedom of Information (FoI) requests are made – wasting public money in the process – to enable huge tables of figures to be compiled, ensuring that hard pressed hacks are suitably impressed, and therefore ensuring that much of the Fourth Estate looks no further than summary and press release.

Sadly, there are a number of omissions in the “research note”, of the kind so basic that they would shame any serious researcher. Look at all the tables [p4-8] showing amounts of fines collected: at first glance – and the TPA clearly hope that this is the only glance their efforts will attract – it looks as if all those local authorities are making a lot of money out of the unfortunate motorist. Then ask how much the fines actually cost to collect: this is not told. So any talk of profiteering is worthless (no change there, then).

It gets worse when the “research note” looks at the effectiveness of speed cameras. Here, two basic mistakes are made, but dressed up with lots of very serious looking numbers to throw lazy journalists off the scent. The TPA are trying to suggest that speed cameras have not reduced casualty accidents, but somehow increased them (other potential factors are conveniently ignored). In support of this, a graph has been produced showing a “predicted casualty rate”. 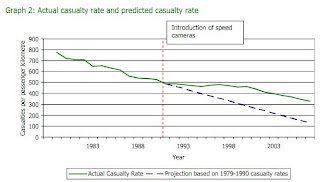 TPA and DA drive down their credibility

But following the trajectory of this rate would see an end to all casualty accidents in the next two years. This, I can guarantee, will not happen: a wilful – yet typical for the TPA – false assumption. It gets worse: a regression analysis (and a Chow Test) are then featured [p12-16], which is meant to impress the average hack. The analysis uses the point where speed cameras were introduced, in 1991, to show how the casualty rate decline has reduced.

But, again, this is pure tosh: the analysis only works if all speed cameras were installed at the same time – it’s a straight fit. Many cameras didn’t appear until after the 2000 “Tomorrow’s Roads – Safer For Everyone” white paper [.pdf]: the TPA analysis is therefore exposed as a sham.

Once again, no change there, then. More on the TPA/DA very soon.

[UPDATE: this post has appeared, in an edited version, on Liberal Conspiracy. My thanks, as ever, to Sunny Hundal]